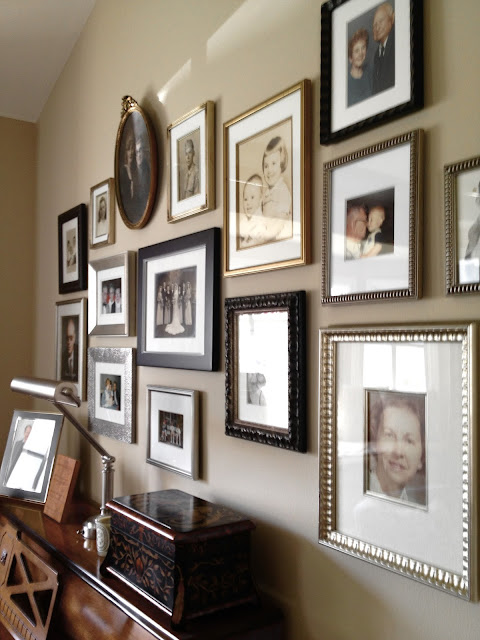 A couple of years ago I was referred to a new client through a painter that I had collaborated with on another home. What began as a simple paint color consultation quickly turned into a full house renovation. I posted a few before and after photos here and here but because the house was never completely finished I have not taken a complete set of final photographs. 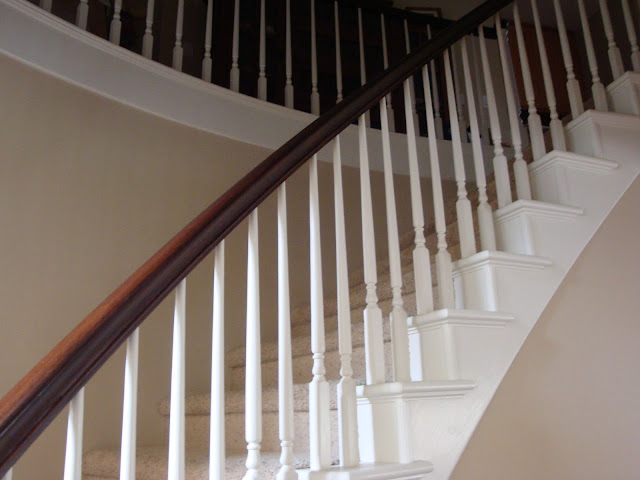 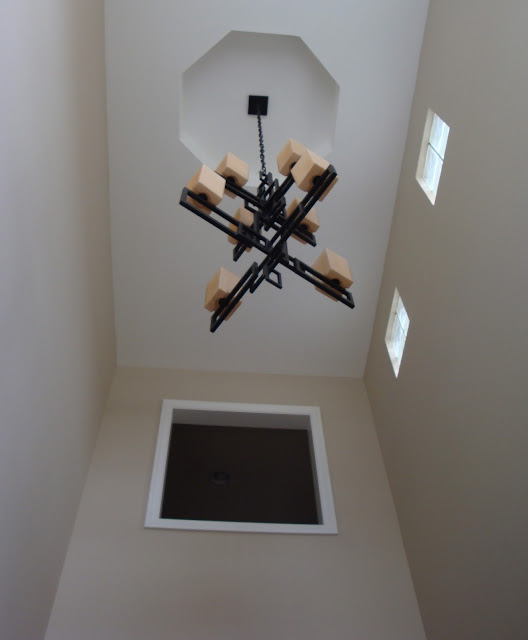 Because the renovation was so much more than they had originally planned on and because of the extent of the work (and the disruption to their lives), we split the job into two phases. Last year we completed the downstairs. We painted and changed out hardware, put in new hardwood floors and carpet, changed the fireplaces and purchased new furniture and accessories throughout. 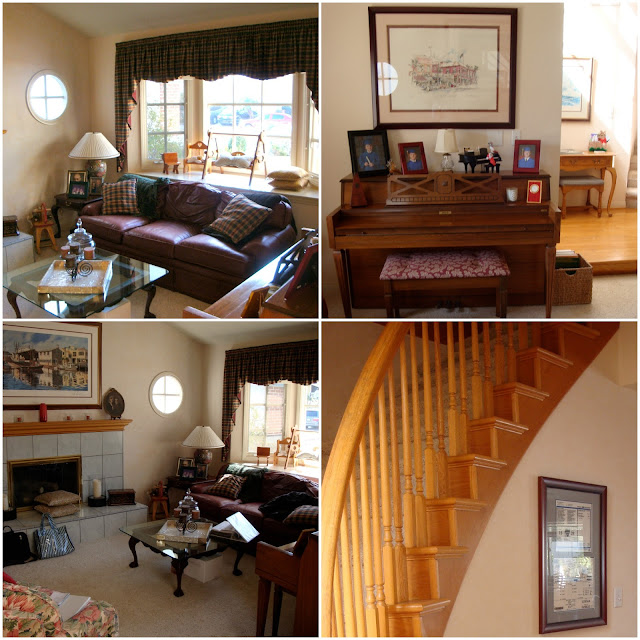 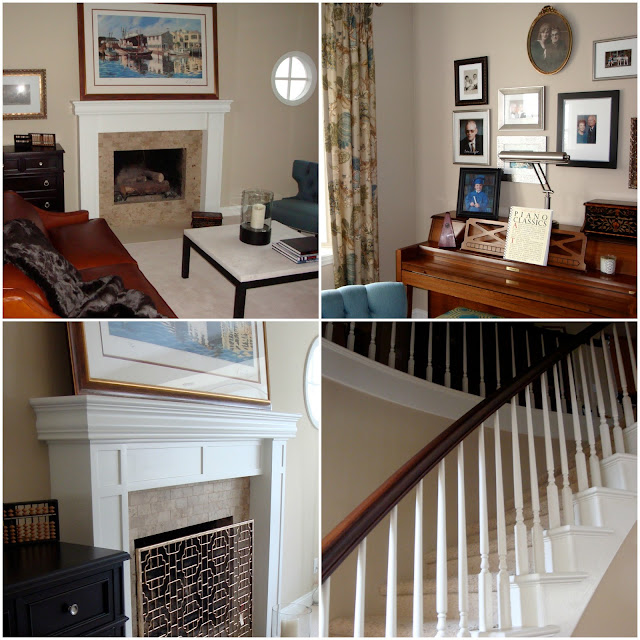 After the painting was completed, the furniture installed and the artwork re-hung, came the task of displaying the family's many photographs. The client is very sentimental and wants to see all her photographs displayed where she can see them. She had a quite a few of those sports plaques - you know the ones where they give you a small photo of your child, a larger team photo and a medal and mount it on wood behind a piece of plexiglass. Some were hung on walls in various rooms in her house and some were all lined up on ledges in her hallway. The photos were old and faded and we talked about what to do with them. I thought they could go in a scrapbook but she really wanted them out where she could see them, so I had my sister take those little faded photos and she restored and enlarged them. We framed them and hung them in one of the hallways. 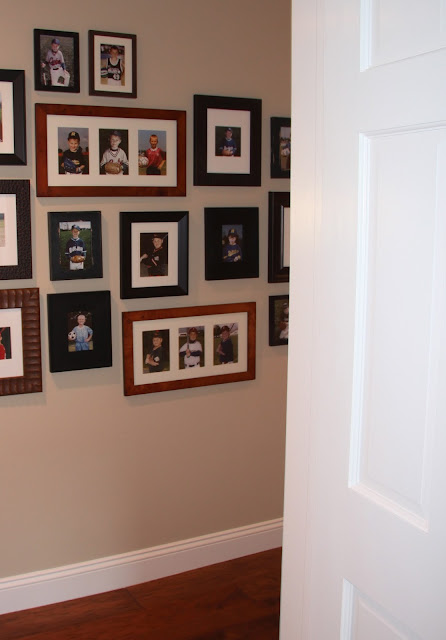 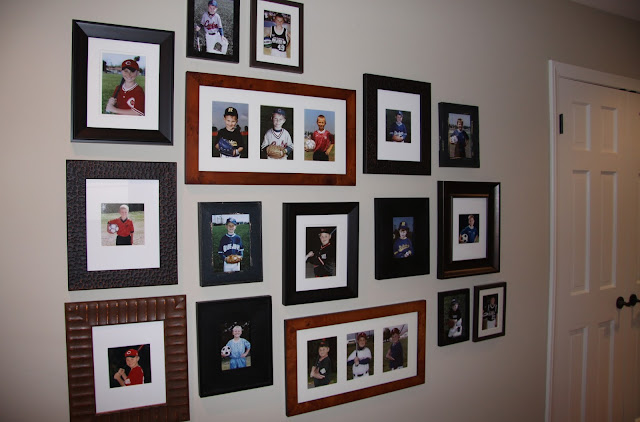 Now, a year later, we are finishing up the upstairs part of the house renovation and she came across more photos that she wanted to display in the same way. 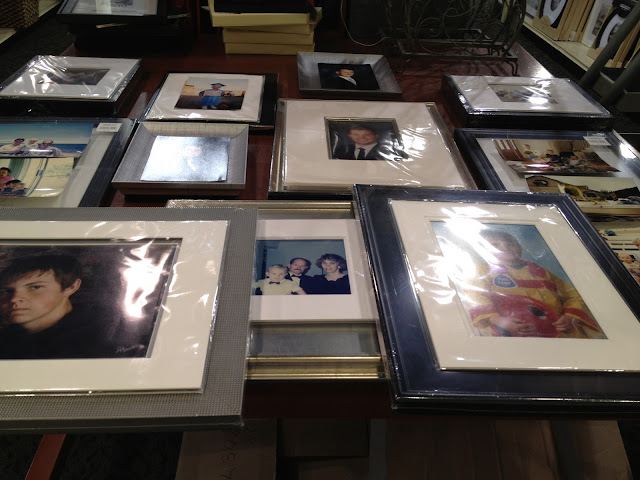 When I am framing photos for a gallery wall, I start by selecting frames that will compliment each individual photograph and also look well grouped together. Because this gallery wall was going in the master bedroom, I wanted it to be somewhat formal and to coordinate with the furnishings in the room. I selected a few frames that might not have been as "masculine" as I might have done if just framing an individual photo (of their son, for example) but that worked well in the group and gave the feel I was trying to achieve with the overall gallery wall. When I am selecting frames, I lay out the general surface area I will be working with and when I am happy with the way I have it laid out, I take a photograph of them. Because I often add or change the mats that come with the frames, taking a quick photo helps later to remember what went with what. 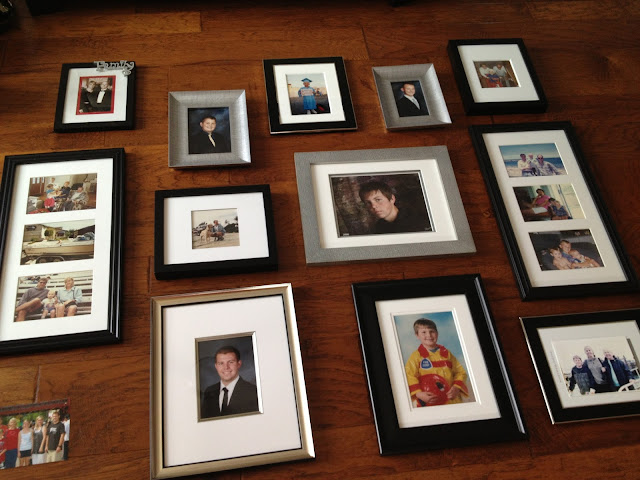 On install day, I lay the photos out on a large surface (usually the floor), check the outside measurement to make sure it will fit well on the wall where it is being hung and then write down a few of the inside measurements to get a roadmap for hanging them. Sometimes I start in the middle and work my way out and other times (like I did with this wall) I start  on one side and work my way to the other side. 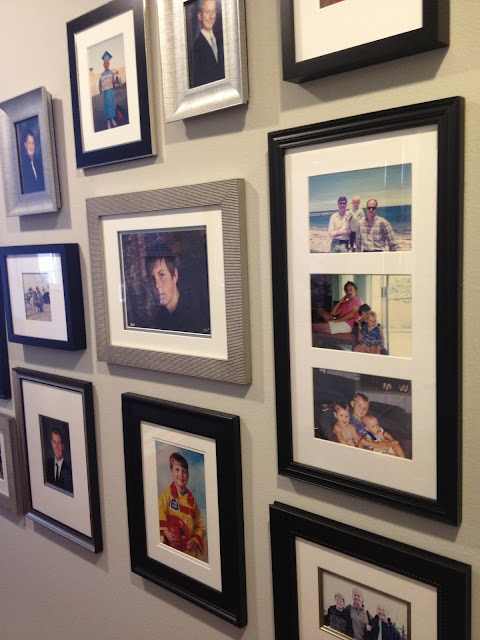 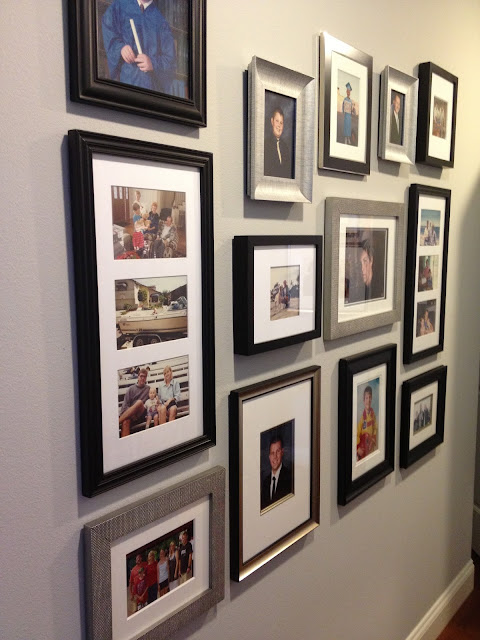 Normally I like photographs individually framed and am not a huge fan of grouping photos inside one frame. But on this wall, since space was limited and there were so many photographs, I needed to group a few and I think it came out quite nice actually. 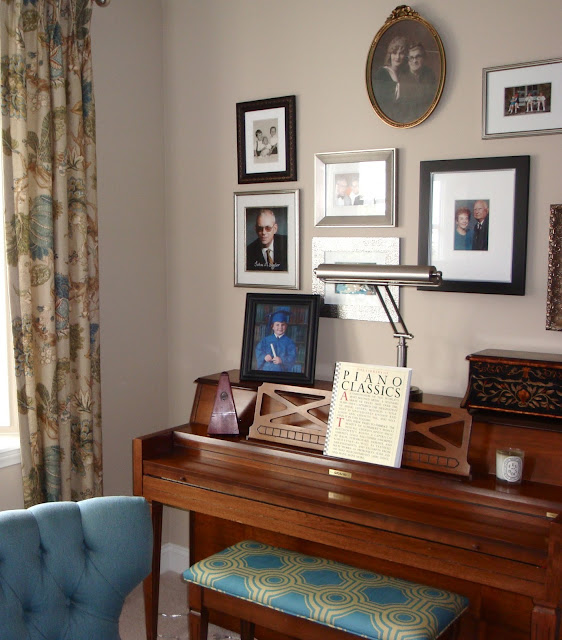 I knew when we hung this wall of family photographs last year, that it might be added to someday (weddings, grandchildren, etc.) and there was room for a "few" more frames. Last week, my client came across "quite a few" more family photos and was hoping to add them to the gallery wall above the piano. I was not sure if they would fit, but framed them all and figured we would make room for them somewhere. 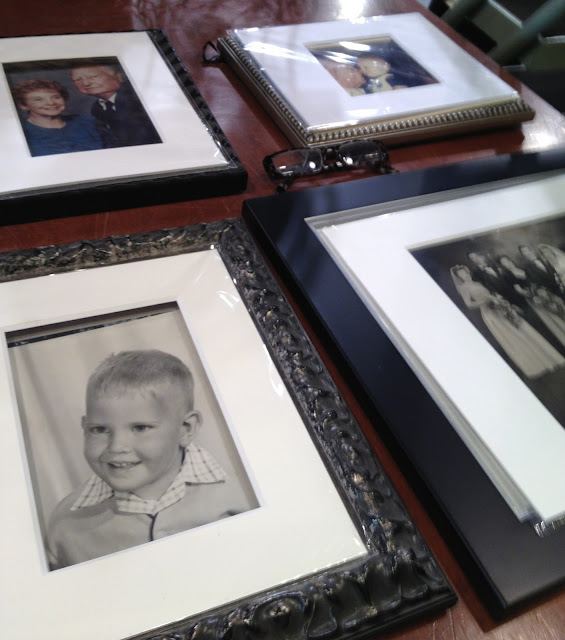 I re-framed one photograph to make it smaller, used that existing larger frame for one of the new larger photographs and only had to re-locate one photograph. 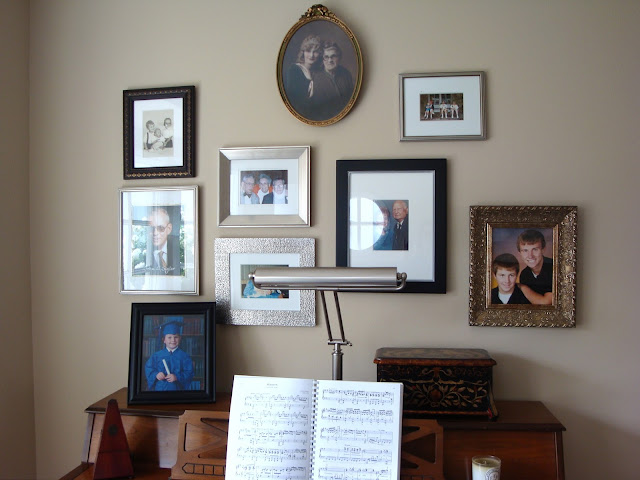 The photograph on the far right was removed and will be relocated with two more new photographs that are currently being framed on another wall in the house. The large vertical black frame in the middle was used for a large horizontal photograph. The framed photograph on the piano was moved to the upstairs' bedroom gallery wall. 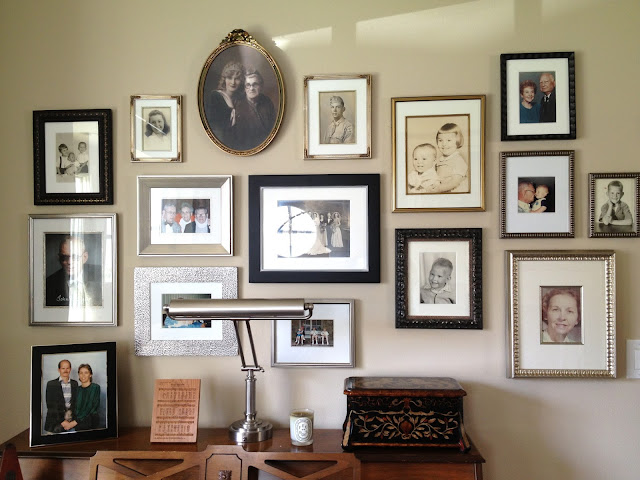 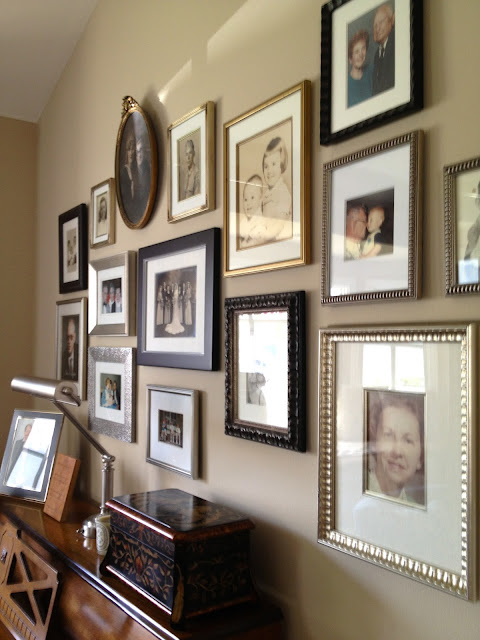 I actually like the new wall better. I love when things turn out that way!
Posted by Unknown

It looks so good....love how you organized her pictures...

Awesome! Love the mix of frames and old photos. Such a great way to honor family!

I just helped my sis lay out a gallery wall in her new home... hoping it turns out... :)

The art display looks wonderful. So many family photos can be a challenge, but I think it best to group them en masse as you have done!