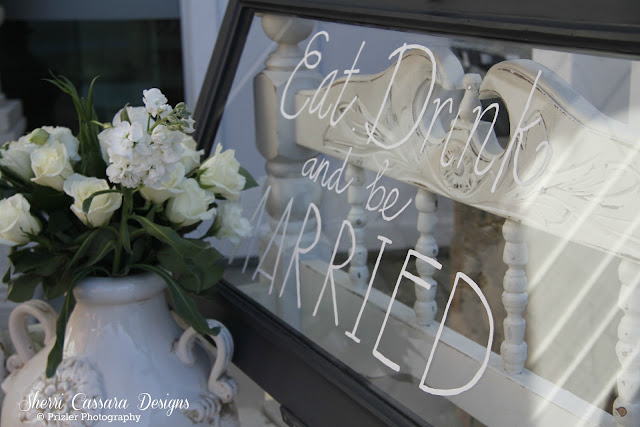 A few miles from the chapel where the ceremony took place, is a golf course country club where the reception was held. 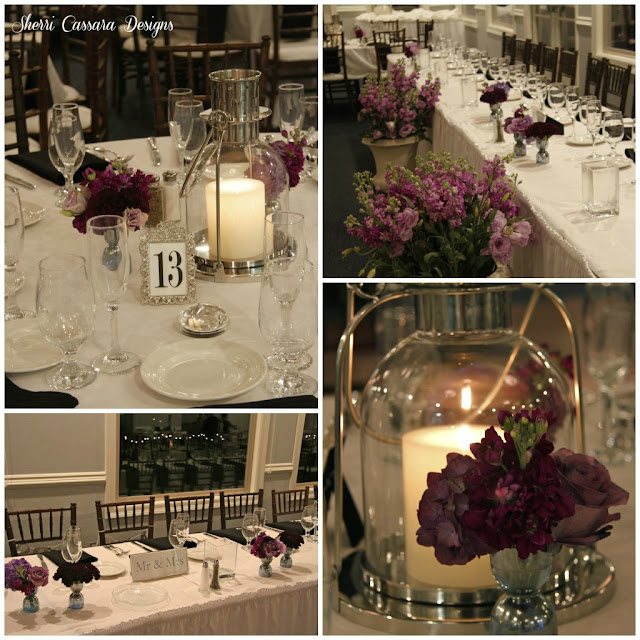 Because there was a wedding reception that preceded ours, we had only two short hours to set up. In addition, we wanted to use some of the flowers from the ceremony for the reception as well so we had some juggling to do. It required a lot of planning, organization and a crew that could follow directions and work fast. I posted about how we pulled it all off here. 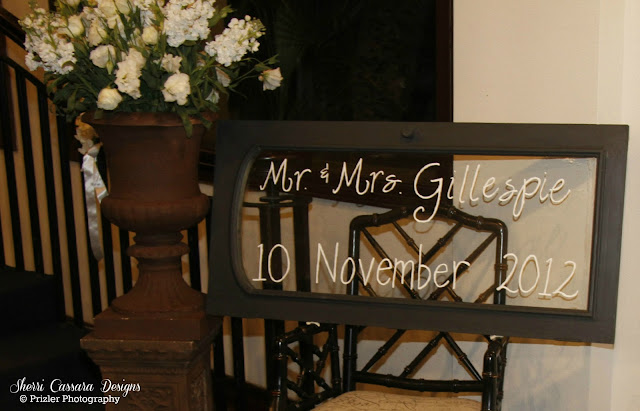 At the foot of the staircase that led to the reception ballroom, we placed a vignette of furniture and some of the ceremony flowers. The hand painted window directed the guests up the stairs. Both the window signs were painted by my daughter. 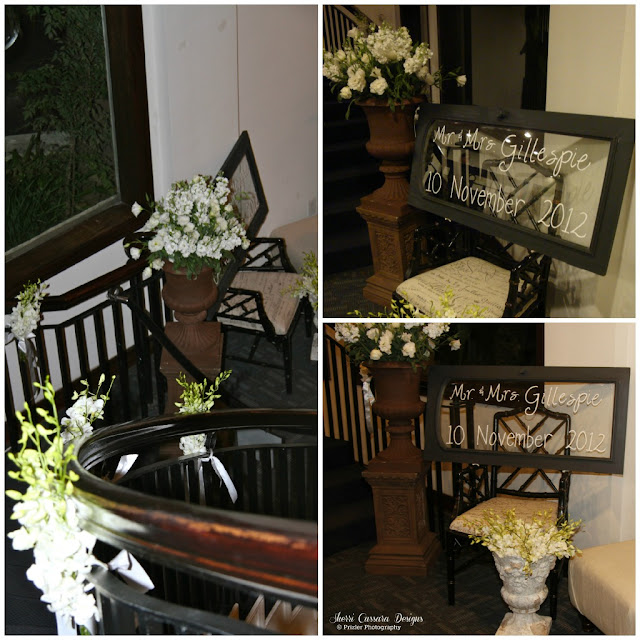 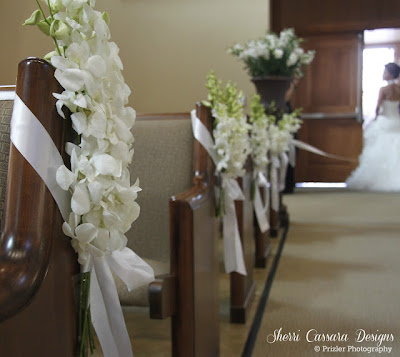 We used the same flowers that were on the pews of the chapel on the staircase. This was the most challenging part of it all as we had to get the flowers from the chapel as fast as possible and then get them tied on before the guests started arriving for a cocktail hour downstairs. I put one of my daughters in charge of this part and she did a fabulous job! 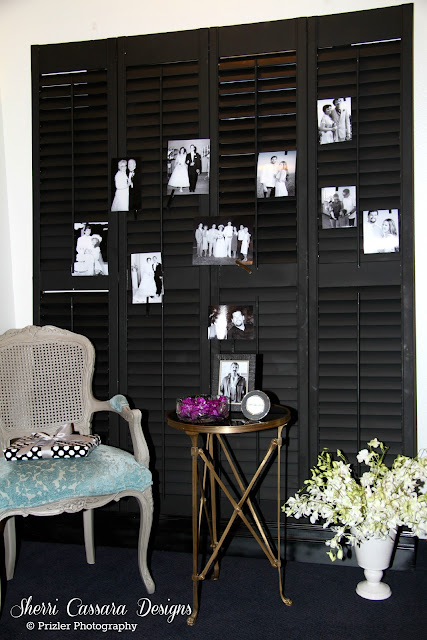 At the top of the stairs the guests were greeted with a photo wall of the bride and groom's family weddings and a tribute to the groom's father who had passed away. The shutter belonged to my neighbor who was getting rid of it ... we spray painted it with black primer. 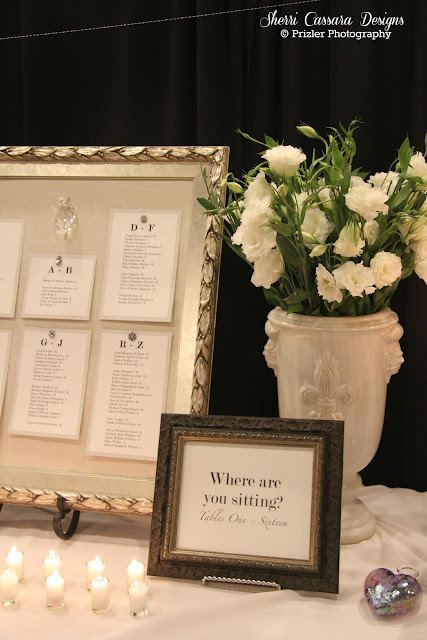 The seat assignments were done very simply in order to be able to set everything up within the limited time frame. 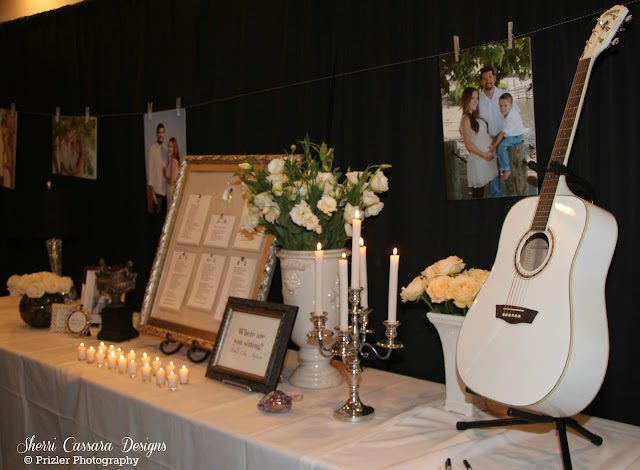 The groom is a musician and a white guitar was used as a guest book. The guests signed their names with black sharpies. 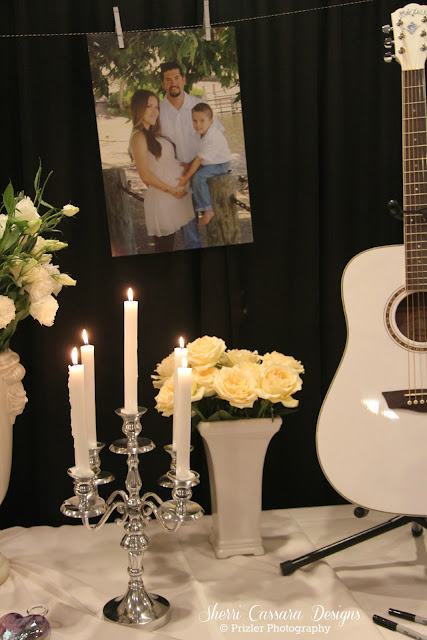 Enlarged photos of the bride and groom were displayed on a black backdrop. 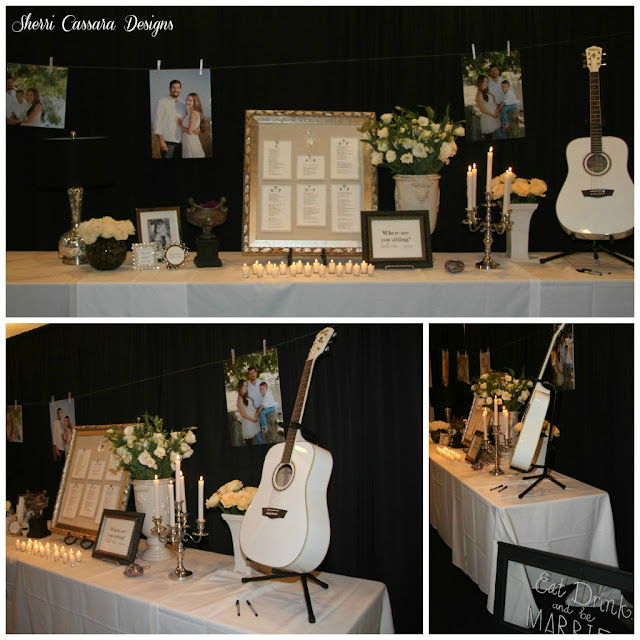 The ballroom was newly remodeled and was a fairly simple set-up ... 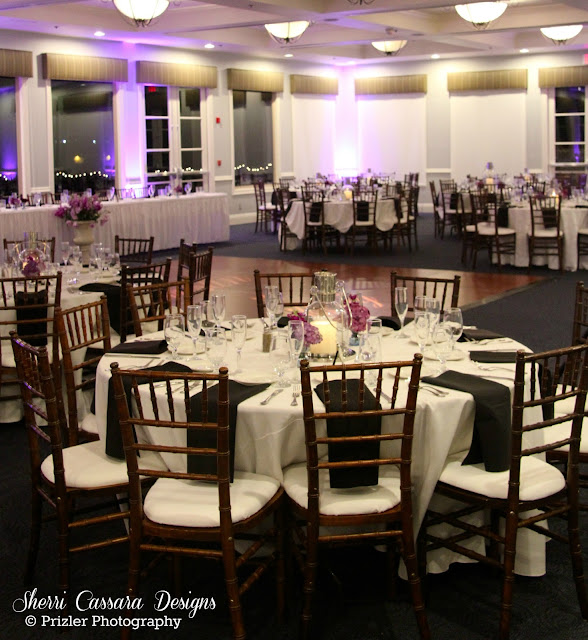 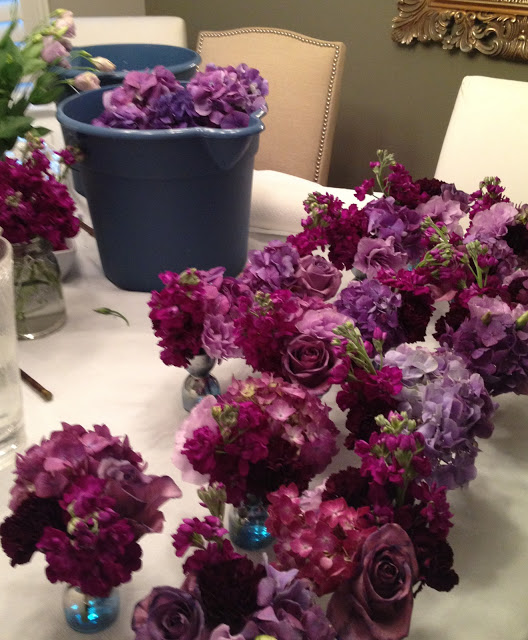 The centerpiece flowers were made up of hydrangeas, stock, roses and carnations. 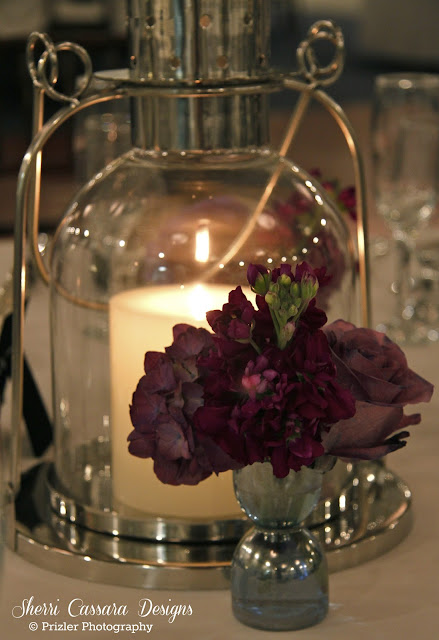 I used the same vases that I used for my daughter's wedding but I painted them with Krylon Looking Glass spray paint. 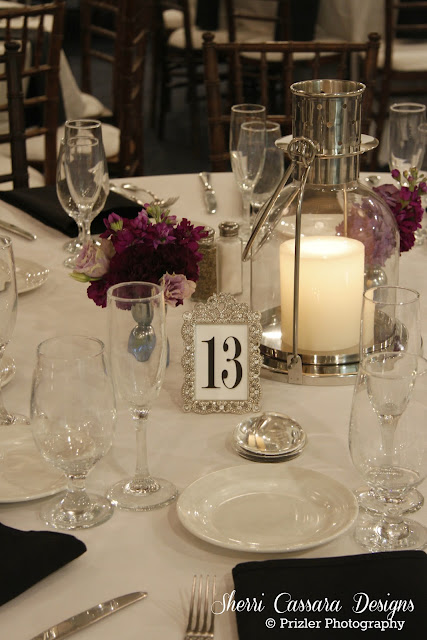 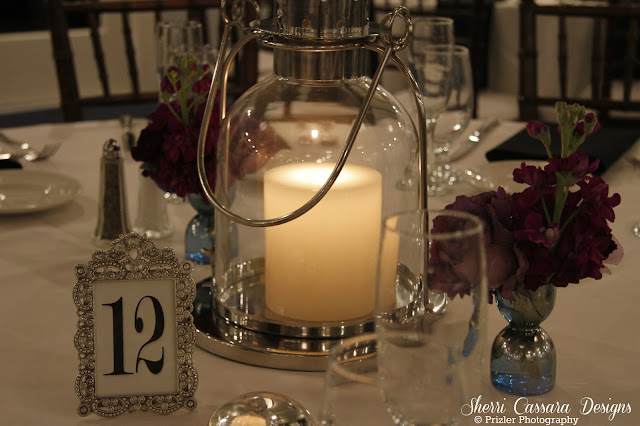 The tables were numbered with jeweled frames and glass domes. 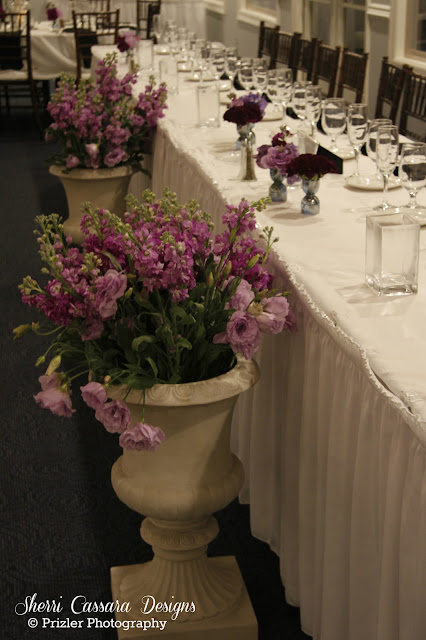 We used the flowered-filled urns from the ceremony here too. 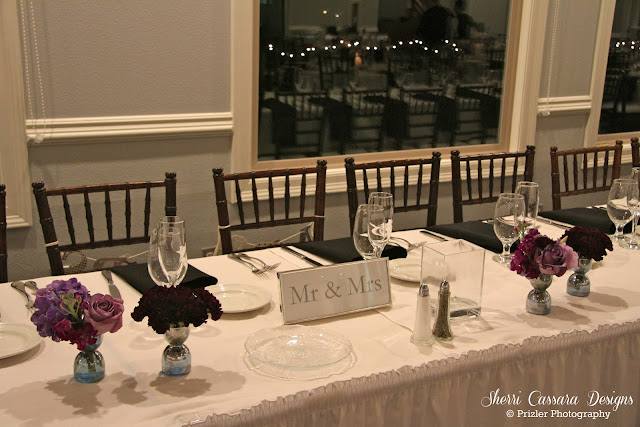 Empty vases were placed on the bridal party's table for the bridesmaid's flowers. 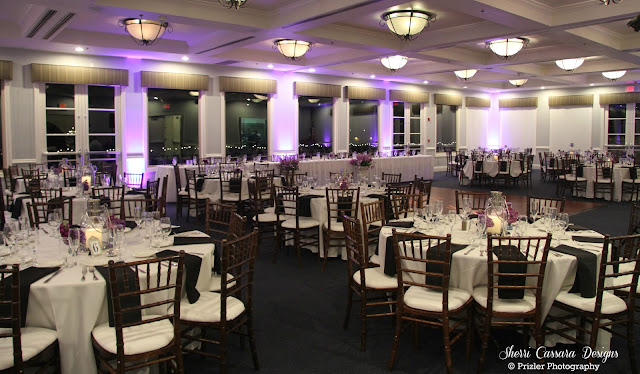 And of course, we couldn't leave without styling the restrooms ... 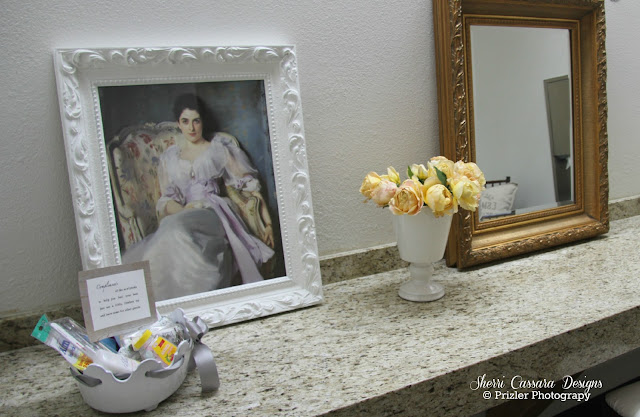 This one was an extra challenge as the construction that was supposed to be completed wasn't ... and as I was packing my car to leave to style the chapel I got a call that the mirror in the women's restroom broke. I quickly grabbed a few things from my house to fill in. 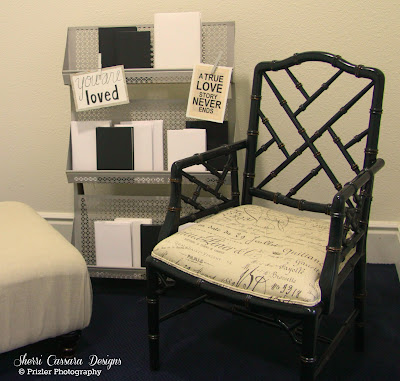 We placed vignettes of furniture and accessories around to fill up empty spaces ... 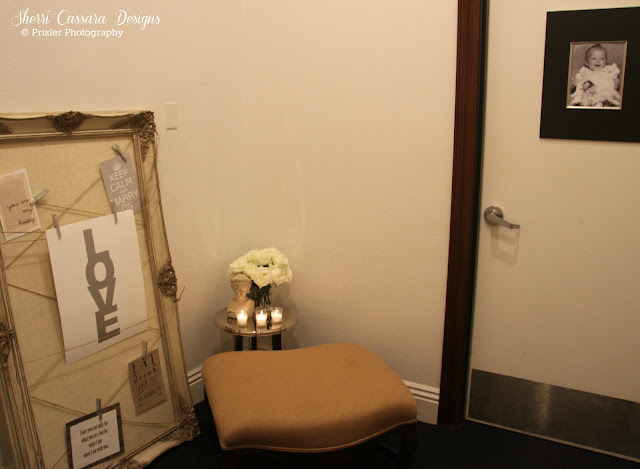 And placed baby photos of the bride and groom on the restroom doors to cover the commercial ones. 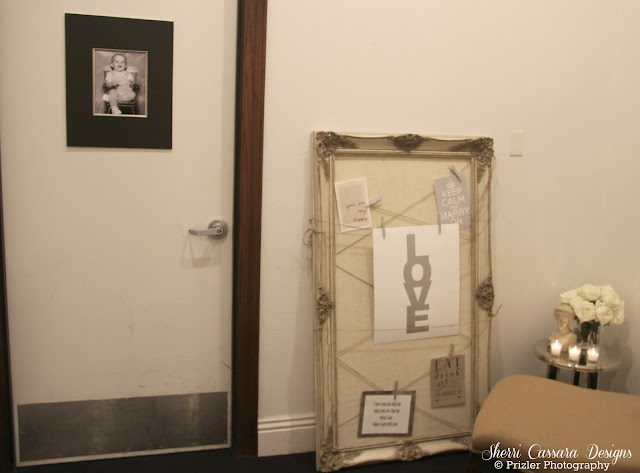 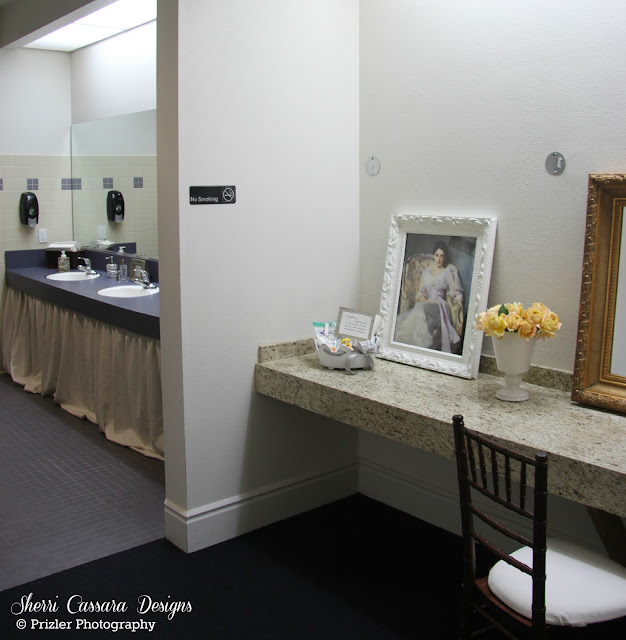 All that in two hours. Whew!
Posted by Unknown

Email ThisBlogThis!Share to TwitterShare to FacebookShare to Pinterest
Labels: weddings

Gorgeous! I love the color of those hydrangeas.