Year of the owl?

Have you noticed that owls seem to be everywhere right now? My dad loved owls. In the summer when we were kids, there were sometimes owls that would nest in the trees on our street and I remember my dad going out to watch them. We didn't live in the country so it was unusual that we would have the owls. We even had an owl cookie jar that sat on the kitchen counter. 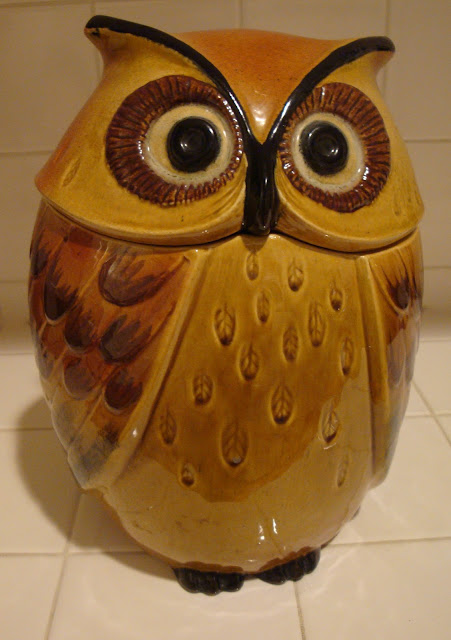 A couple of weeks before Christmas I wandered into ZGallerie and was drawn to some owl ornaments. Maybe it was because they were white and glazed. I am drawn to anything white and glazed! But they made me think of my dad. I think I miss my dad now more than ever. He was an architect and I learned so much from him and I would give anything to have him here now. I thought these little ornaments would be perfect gifts for my two sisters and my mom. So I bought four of them; one for each of them and one for me. 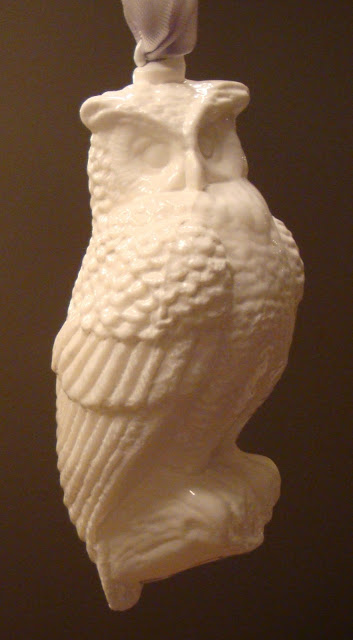 A few days later I saw these charms from Fossil and knew I was on to something. So I bought three of them and wrapped them up for my two sisters and my mom. I put the inexpensive ornament inside the box and tied the nicer gift on the outside. I was really excited about the gifts because I knew that they would love them. 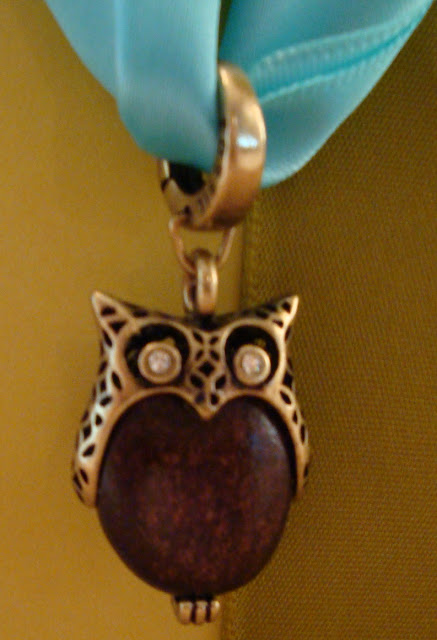 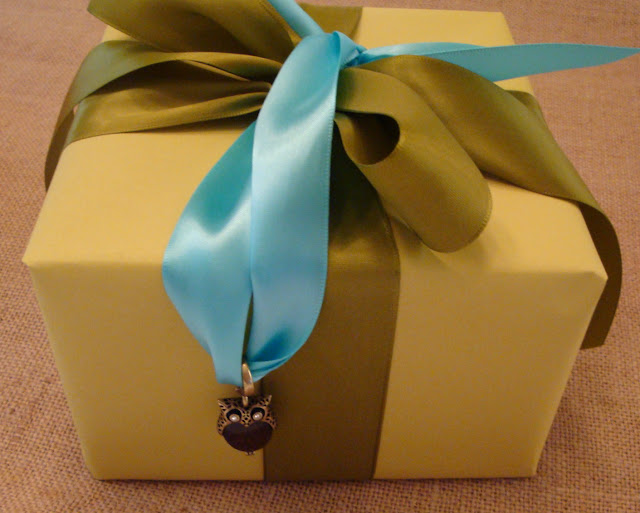 Each year on Christmas Eve we have a silly $15 gift exchange. Last year our theme was 'green' which was really easy because it could be the color green or 'eco' green. We ended up with gifts from a green Betta fish to rolls of toilet paper ($15 worth!). This year our theme was legs (don't ask!) and so when I saw this darling white stuffed owl ornament at The Paper Source with the cute little legs I knew I had my exchange gift. 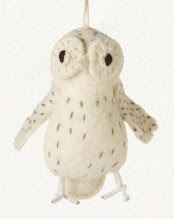 I also realized I had my own little theme going on ... owls! Do you remember that I had found this owl ornament from Target and wanted to cover my tree with them? I had searched all the Target stores in my area and only found the one. 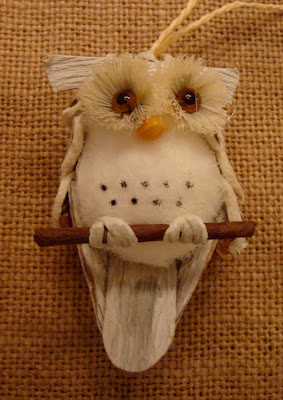 So imagine my surprise when I opened up my illustrator sister's Christmas card a few days later and found these owl tags that she designed inside! We were on the same wavelength! 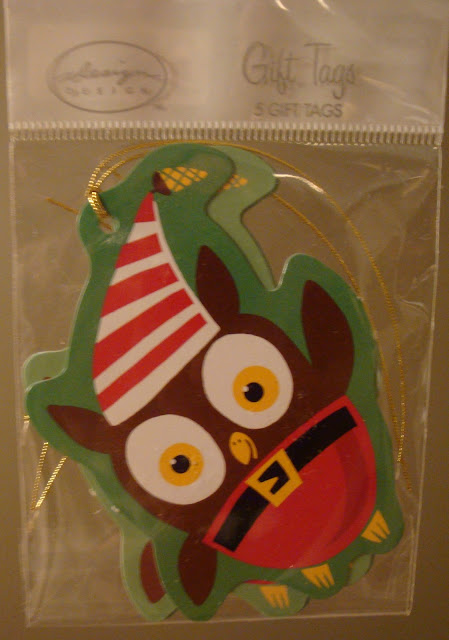 It didn't stop there. On Christmas Eve, the exchange gift I ended up with were these darling owl salt and pepper shakers. Actually the first gift I chose was a cane but my brother-in-law stole it from me (really Dan?) so I got to choose again and got the owls. How perfect! 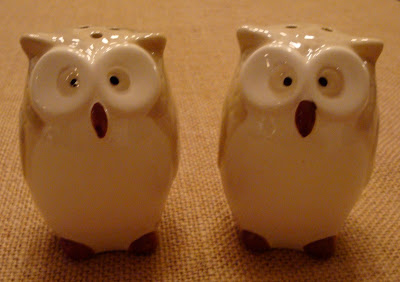 And then my other sister passed out these ornaments to everyone! 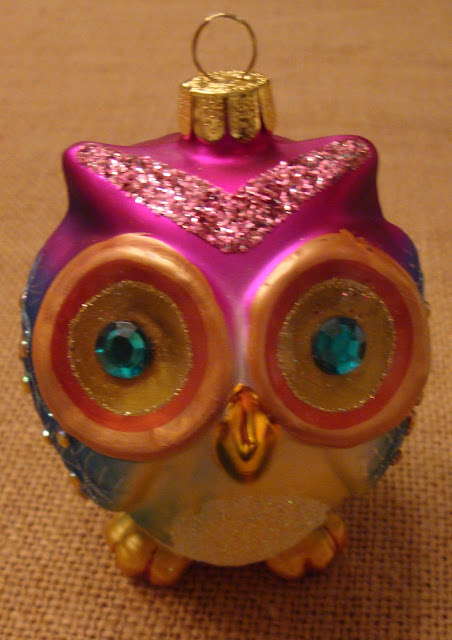 And it got even weirder. My mom started handing out her gifts to each one of us ... all packaged inside these darling little owl bags that my sister had designed! She had walked into a small gift store near her house and had found them - she recognized the design! 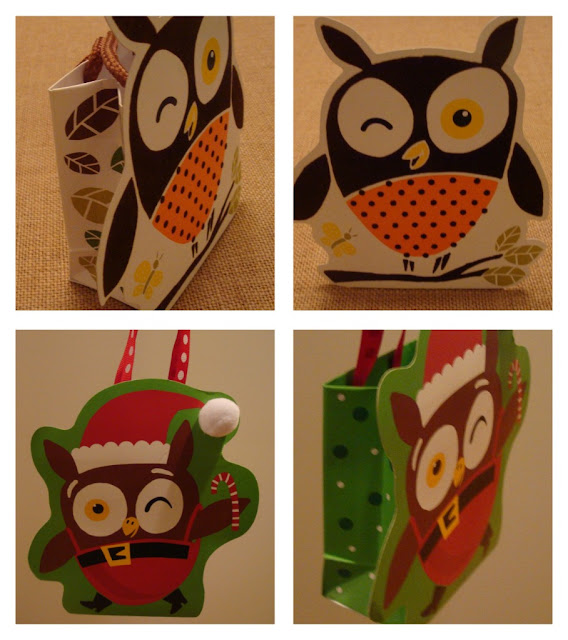 I guess I didn't realize how big owl stuff is right now! It turns out my sister even has owl fabric!
So now I have owls on my mind and of course am seeing them everywhere! I love this umbrella stand from Two's Company: 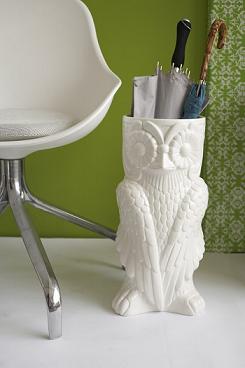 And this lamp from West Elm:
Anthropologie has an owl plate: 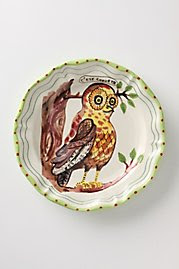 And isn't this nursery with the owl decals adorable?
Have you sighted any owls lately?
Posted by Unknown

Wow, what a fun post! Thanks for posting my art :) Hey, do you have that cookie jar??? I competely forgot about it, but the minute I saw the photo it jolted me back to the past...haha. Ps I LOVE my charm. It's some kind of a seed, right? I've seen it before, but can't place it.....xoxox

YES ;) I do have that cookie jar. Patti asked the same thing! I'll trade you for dad's trojan horse! ha ha.

My mother always loved owls too.... I never understood why. So interesting.

Thank you so much for your comment today. I'll watch Dexter tonight while I fold my laundry! :-)

Have a great day, sweetie!

Hi!
Just found your blog via Kasthysue's and I love it! Read it from cover to cover.
Your daughters wedding was gorgeous! That Wizard Of Oz party was amazing! And your Milo is the sweetest!(I have a pit mix pound puppy myself) *winks*
I love how orderly (And I mean that in the bestest way) your blog presents itself. I'm a non-orderly kind of girl myself so I'm hoping some of your organizational abilities will rub off on me *winks*
I'm your newest follower and looking forward to whatever you'll share next. Vanna

I love your owls...especially that fossil charm. My daughter and I call my husband, her father, our wise old owl and consequently collect owls whenever we see one that strikes our fancy. In fact, this year for Christmas she made ornaments similar to the ones your sister made and also drew me a painting of two owls in a tree which I love. How sweet that you all exchanged the same thing....hang on to your memories of your Daddy...mine has been gone for three years next month and I, too, miss him and wish he was here to hand down advice and hugs.

So cuute! I love the little one hanging from the gift ribbon.

Thanks everyone... glad you liked the owls :)

WHOOOO WHOOOO!! YOOOUUUU have my owl cookie jar. Give it up sister! lol

Owls are so cute and i had a snow white one for Xmas decor. Fiona