I heard once that the Golden Gate Bridge is being painted continually. That they start at one end and when they get to the other end, it is time to go back and start all over again. It turns out that is not really true, but that is what it feels like in my home when it comes to de-cluttering. I start at one end and when I am done, it really is time to start at the beginning again. Do you have that problem?
I am generally a very neat person. I grew up with a belief system that everything had a place. My father's garage had all his tools hanging neatly on peg board; each one with its own special place. We did not have piles of stuff on the side of the house and things were expected to be put away.

So why am I constantly de-cluttering? It seems like I should be able to do it once and it would stay that way. But it doesn't. Part of the reason is that as life changes, there is a natural moving around that occurs in the house as well. Children get older, certain toys are not needed any longer, other things are. Kids move out, new closet space is available, kids move back in... those kinds of changes. We went from needing one office in the house to needing two. I was able to downsize in certain areas ... and required more space in others. It seems it is a constant moving around. But there is more to it then just that. I just have way too much stuff.

I just finished going through every cupboard in my house and gleaning out every thing that wasn't being used - all the excesses. I started with my kitchen, went through my clothes closet, the linen closet, the bathroom drawers, my office and the final stop was the garage. The garage was the worst ... everything that did not have a place inside the house was stashed out there. I did pretty well going through all of the cupboards; made some brutal decisions about things I was just holding on to and it felt good. I saved the tools until last.

"Garages are the elephant burial ground of the 21st century. Stuff goes in; stuff never comes out." - Peter Walsh 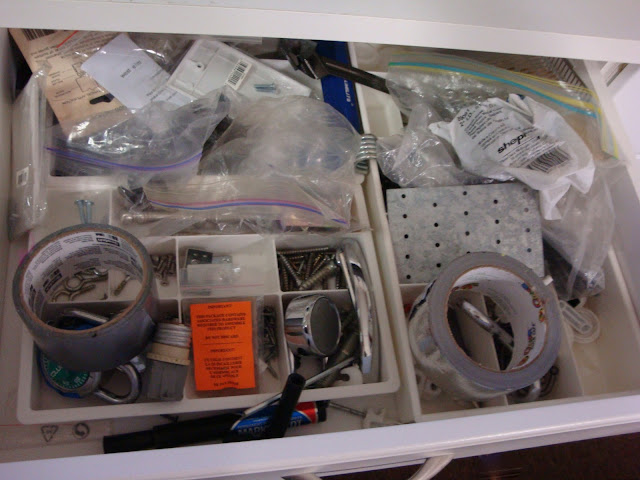 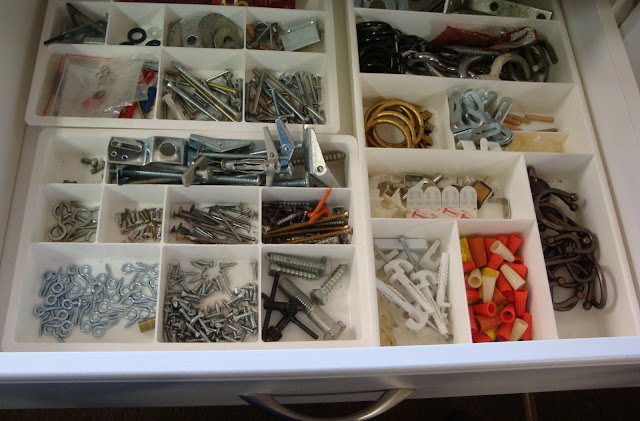 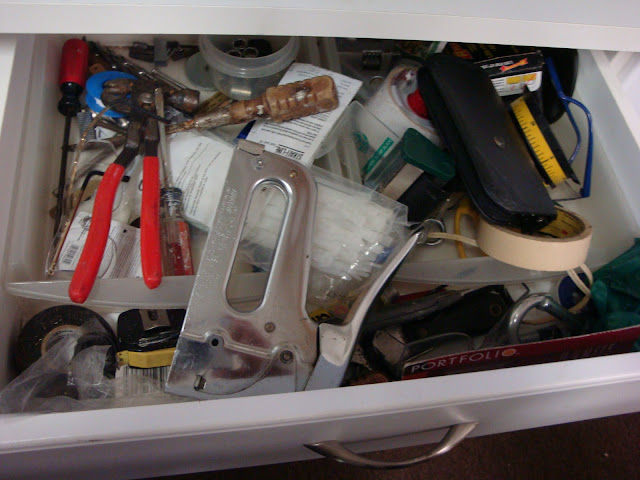 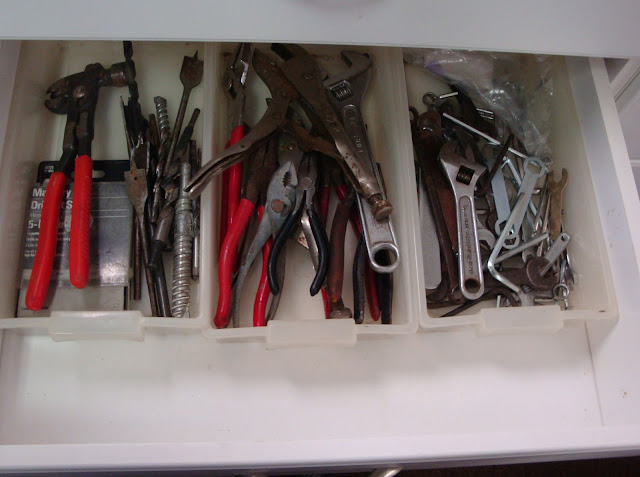 When we put in the new garage cupboards and drawer systems several years back, all the tools were put away neatly and everything had a place. But that was not how I found it when I went out to straighten it up. I wanted to blame it on my husband (it couldn't be ME, right?). But then I opened up the paint drawers. Since I am the one who paints I cannot blame this one on anyone but myself. 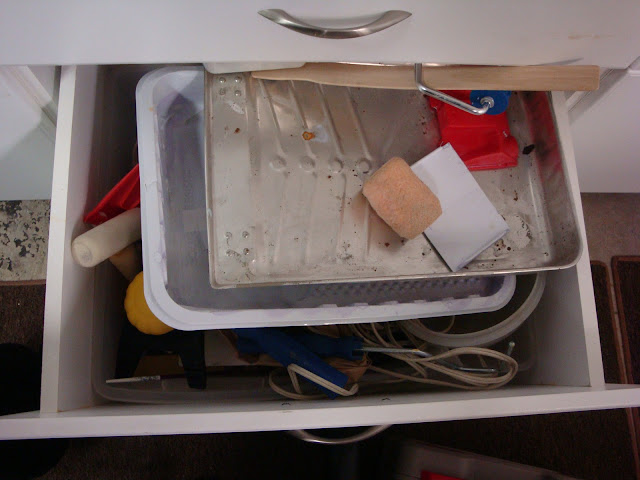 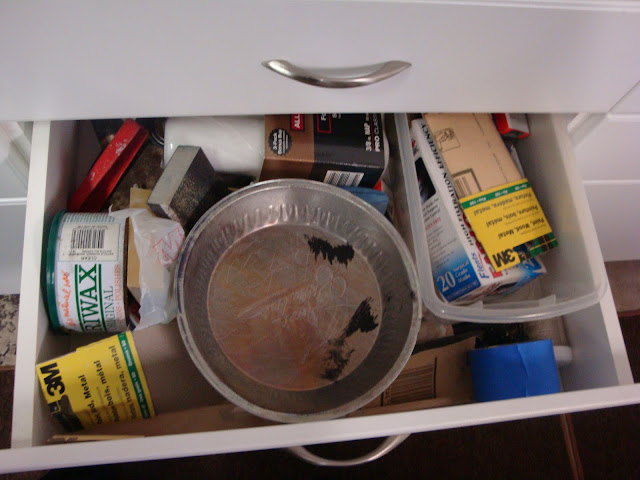 Paint drawers after. (Better but still not "Martha worthy!"). 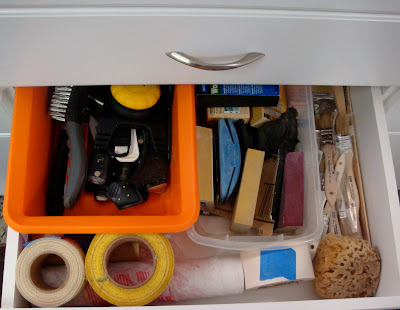 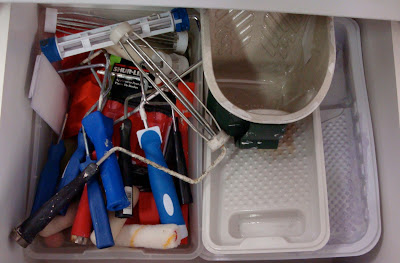 I know that part of it comes from bringing more stuff in. New paint cans, more painting supplies, extension cords that were needed for those new lights I added two Christmases ago ... but most of the time I would say the problem lies more with not putting things back where they belong in the first place ... sheer laziness (its out in the garage for goodness sakes - who sees it, right? 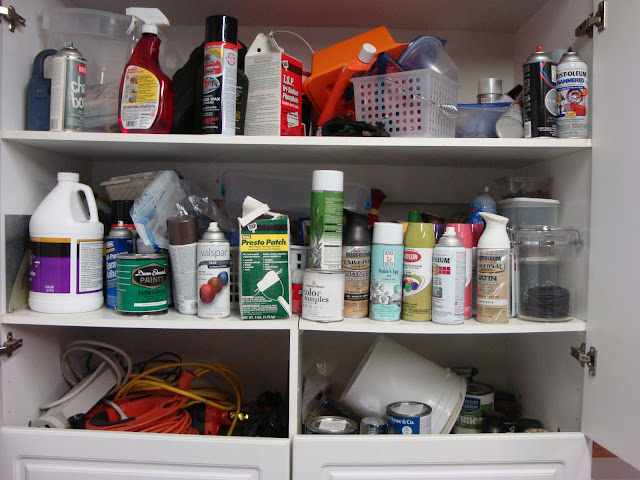 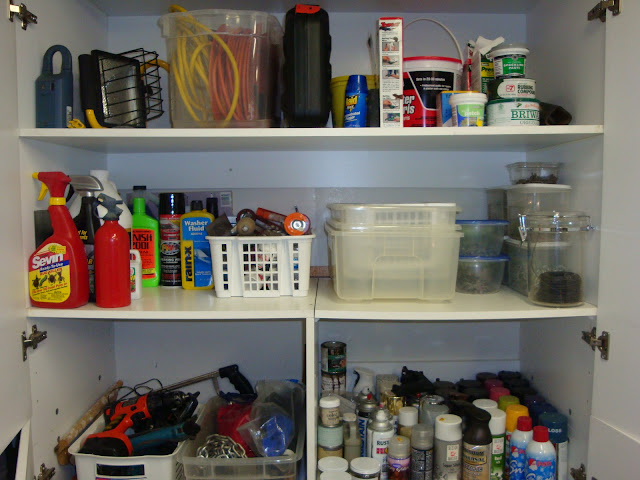 I don't have the answers (obviously!) but I think the question is a good one. Why does clutter form? Is it a lack of time? Or space? Or just the case of bringing in too much stuff. Probably all three I am thinking.
But one thing that I do know, "my stuff" is taking up way too much of my time managing it (keeping it neat, finding space for it...) and that needs to change. I am tired of going through, getting everything cleaned up only to have to start over again.
And yet I know, that like everything else, it is a process. I want to own only what I use / only what I need. But there are things I cannot (or am not willing to) get rid of yet. Things I am saving for my daughters who might want them someday, toys they may want for their children, books I am not ready to part with, and dishes that are beautiful and even though I do not use them now, I may want to at some point. And so the cupboards although honed done and definitely neater, are still more full than I would like and will stay that way until I can part with more... maybe the next time around.  In the meantime, my goal is to maintain what I have done so far (so that I do not have to re-do what I have worked so hard to achieve) and to evaluate each and every item I bring into the house from now on.
Quote of the day: "We love our stuff, we hate our stuff, we can't live without our stuff. We lust after other people's stuff ... We donate our stuff to charity, stick our stuff in a bookcase, auction our stuff on eBay, and then we go out and get ... more stuff!" - Lisa Kogan for Oprah magazine, March 2011
Posted by Unknown

Email ThisBlogThis!Share to TwitterShare to FacebookShare to Pinterest
Labels: organization

I shall think of de-cluttering like painting that lovely Golden Gate bridge, it does seem that everything looks brighter and sunnier after being painted or organized. You will love this site, declutter design - a gal who does de-cluttering and staging...to make things look all fresh and new.
Time for me to de-clutter....again....and again.
pve

You're doing a great job, my friend and every time I come here I feel I got a lesson...


Have a blessed week, Sherri!

Post of the Day: A Retreat in Brazil/ Britney Spears' New House.

It feels so much better after de-cluttering. I don't accumulate a lot of things, because I'm constantly de-cluttering...
I just think that the life becomes a little easier when our home is organized!

I think it's a constant struggle for most. Love your progress!