The psychology of color

I wasn't able to get the photos of the wedding that I wanted so I thought I would show you what I was up to today (Monday). Do you remember this psychologist's office I designed last summer?  I posted about it here and here. I got a call from the doctor a few weeks ago saying the building she had moved to had been sold and she had to move again. The bad news was, she had just a few weeks to moving day and I was up to my ears in other projects. The good news was we only had to make a few changes (paint, new hardware, add baseboards and re-space plan her existing furniture). I met her at her office to take measurements and select paint colors. 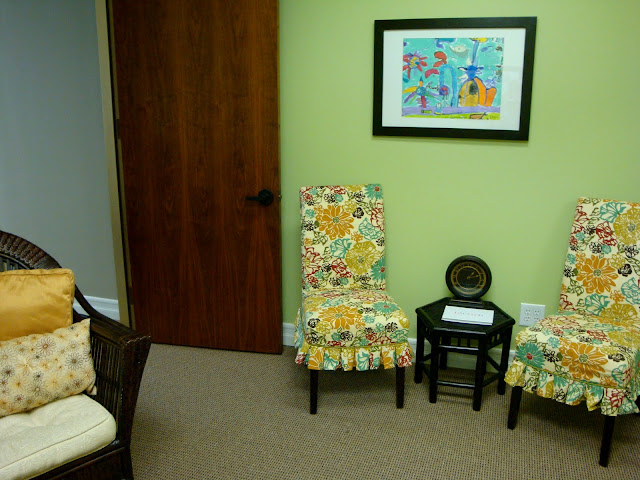 While perceptions of color are somewhat subjective, there are some color effects that have universal meaning. Green is often used in decorating for its calming effect. For example, guests waiting to appear on television programs often wait in a "green room" to relax. 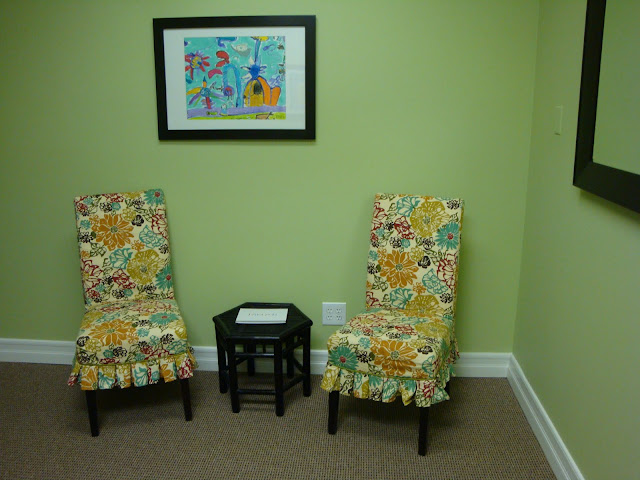 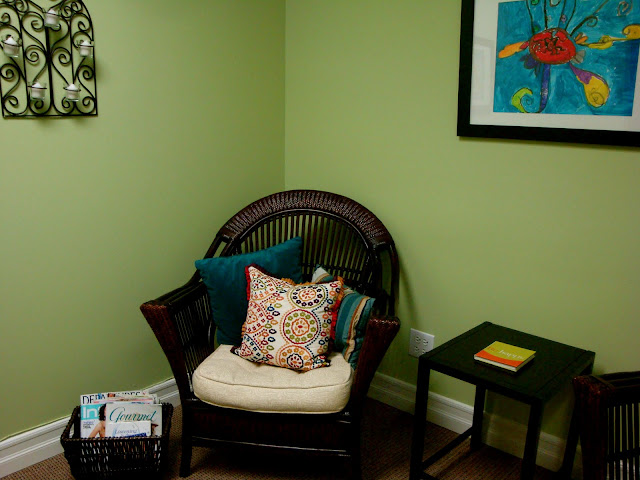 We wanted to keep the existing furniture and her daughter's darling artwork so that was my jumping off point for the color selection. I chose three colors. One for the waiting room, one for her treatment room and one for a small office and hallway that connects the two larger rooms. 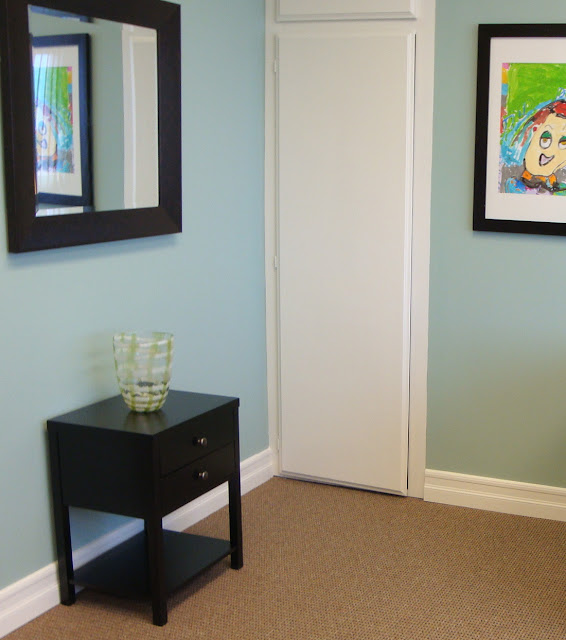 Her previous office had come with yellow walls so this time we decided to mix it up a little. I used Wythe Blue HC-143, Folk Art 528 and Pashimina AF-100 (all from Benjamin Moore) for the wall colors.  I had the vinyl gray base removed and replaced with 5 & 1/2 " white painted baseboard to pop the wall color and add a little architectural interest to the otherwise plain room.  We opted to leave the existing window treatments which look better in person than in the photographs. 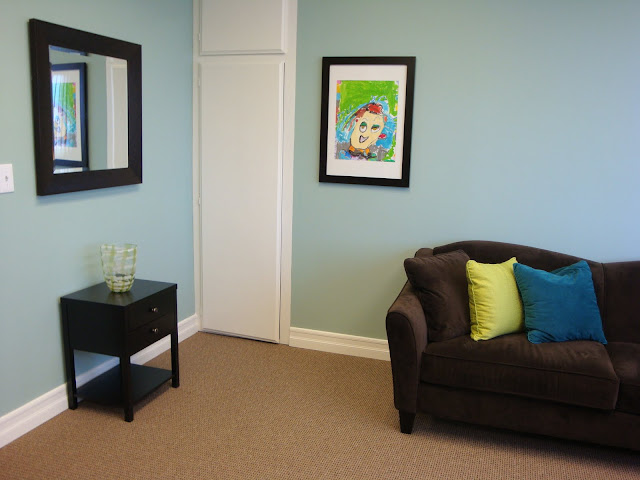 Blue calls to mind feelings of calmness or serenity. It is often described as peaceful, tranquil, and orderly*. 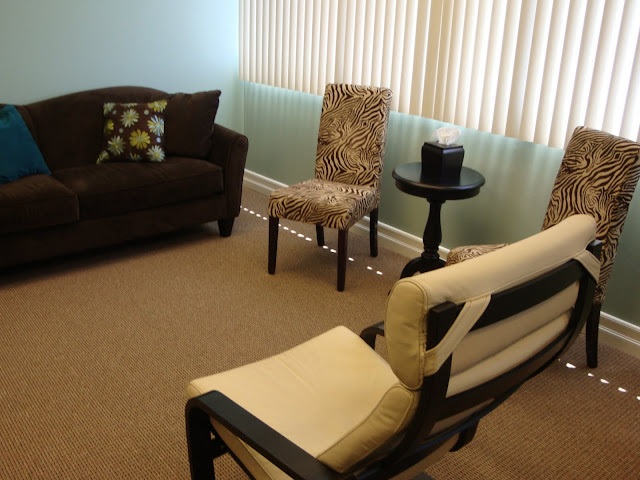 I arranged for her office to be painted and the changes to be made and emailed her a detailed floor plan for the movers to follow as I could not be there on the move-in day. The painting took two days, and she moved in the following day. Today I just had to tweak the furniture slightly and hang the artwork. It turned out to be a fairly easy move for her and less disrupting than she had thought and she is up and ready to start seeing patients tomorrow. 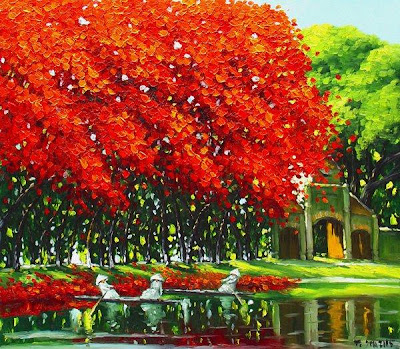 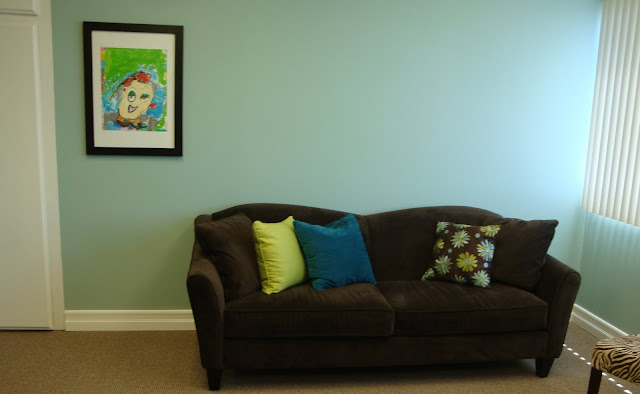 She has two pieces of art that we will be incorporating and we ordered an ivory leather settee to add more seating in the waiting room.  After studying the photographs I think I would like to add a rug in the treatment room and maybe a couple of plants. 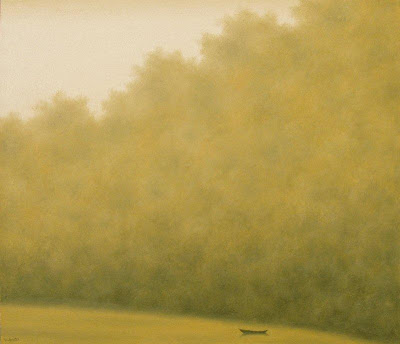 Love learning about the different effects of colour, and (call me a little behind) found it intriguing that that is why they call the 'green room' the green room! Thanks for sharing, great post, love your blog, now following! Miss Walker xoxo

So interesting about colors. Thank you for explaining more about it.

This place is looking great and the more I see your work the more I admire you. Honestly, Sherri. You're terrific!


Have a Happy Day!

Looks great, Sherri! So fun talking to you yesterday!!!

Sherri,
The office looks great, color combination sounds perfect. Can't wait to see the photos of the wedding, looked back over your previous post and what a lot of great ideas you've come with for a barn wedding!
Rebecca

I did not know that about green...no wonder I love it. I love the daughter's artwork...I think it adds so much personality. Great job.