We had big plans for our last day in Chicago. We wanted to take in the Architectural River Tour during the day, the Art Institute in the evening, dessert at a fun outdoor restaurant we had been rained out of two nights in a row, and the most important to my daughter - a morning swim in Lake Michigan. We had been suffering with the heat and humidity for days now and of course the rain that kept getting in the way, so we were looking forward to a day that would be a little cooler and hopefully without rain. 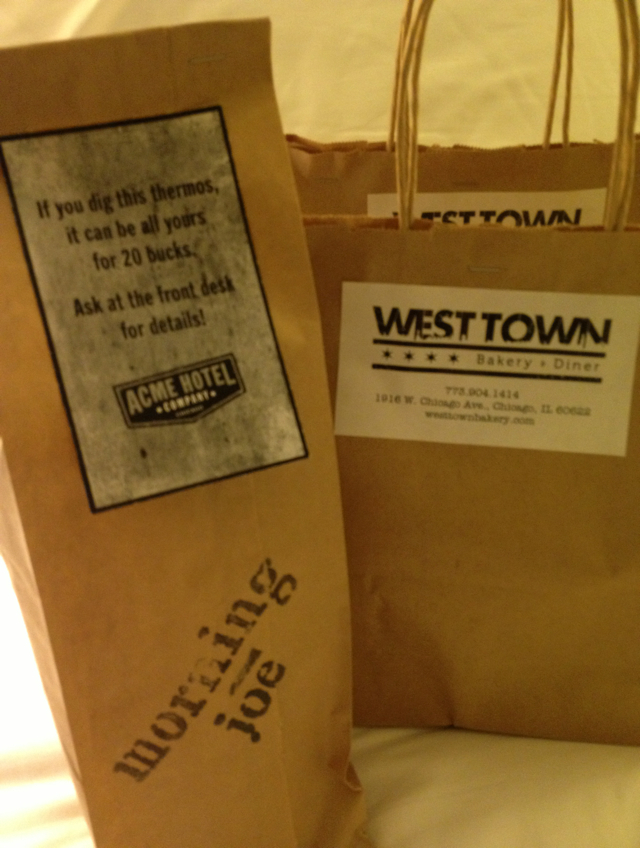 We started our morning with our breakfast being delivered to our room.
Our room, by the way, is in the Acme Hotel which is perfectly located in the heart of downtown. It is unconventional, fresh and fun. It is self-described as a "Boutique Hotel Alternative" and was advertised as the place for someone who has "an eye for design and digs a high-tech vibe". 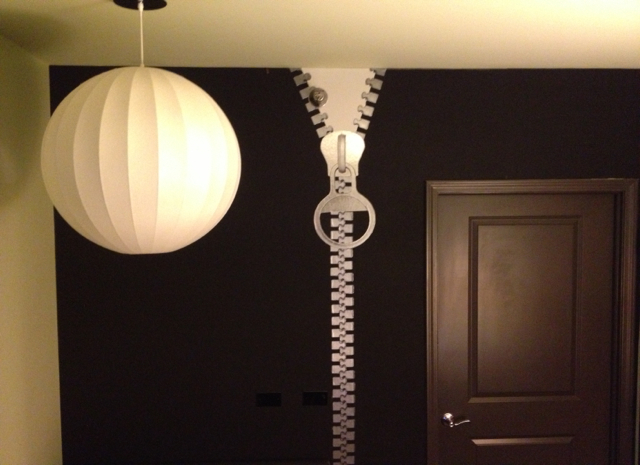 I love the big zipper on the wall! Did you know the zipper was invented in Chicago in 1896? 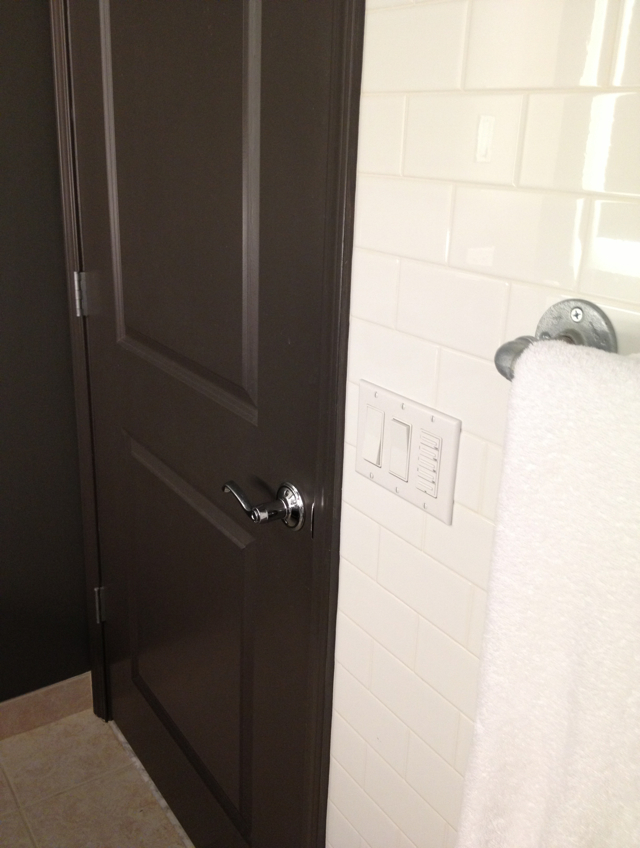 I enjoyed the bathroom fixtures and color scheme ... 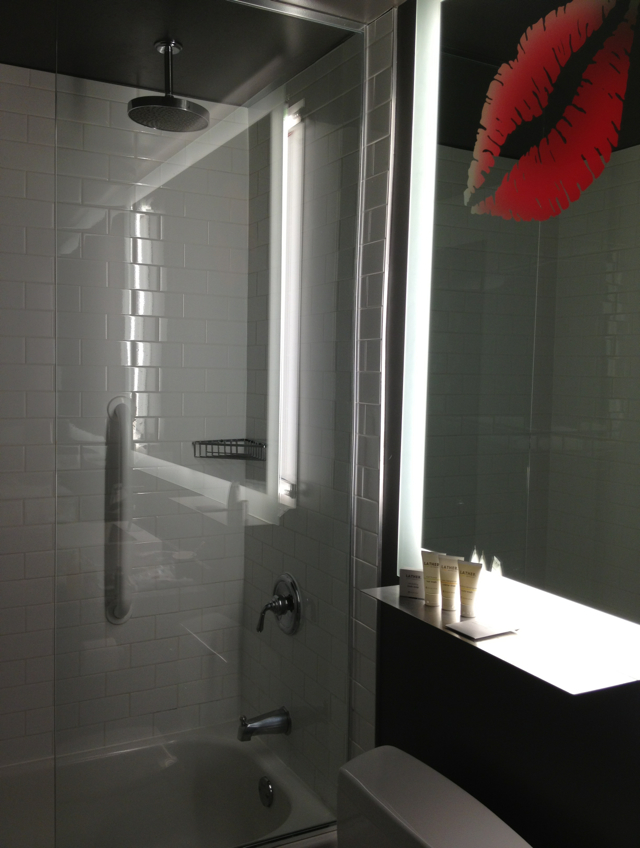 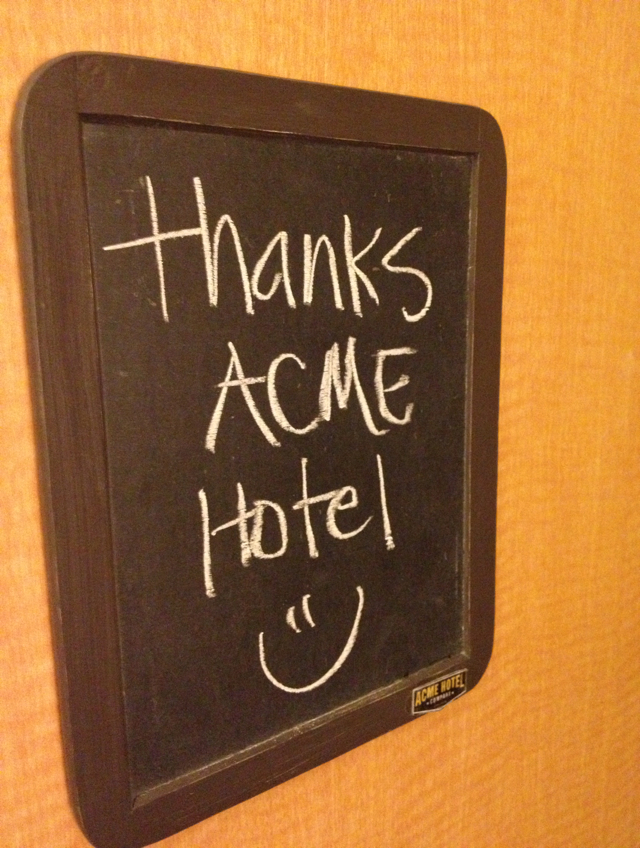 Our room has a lot of fun touches, a "wood" floor instead of carpet and even a chalkboard on the entry door. 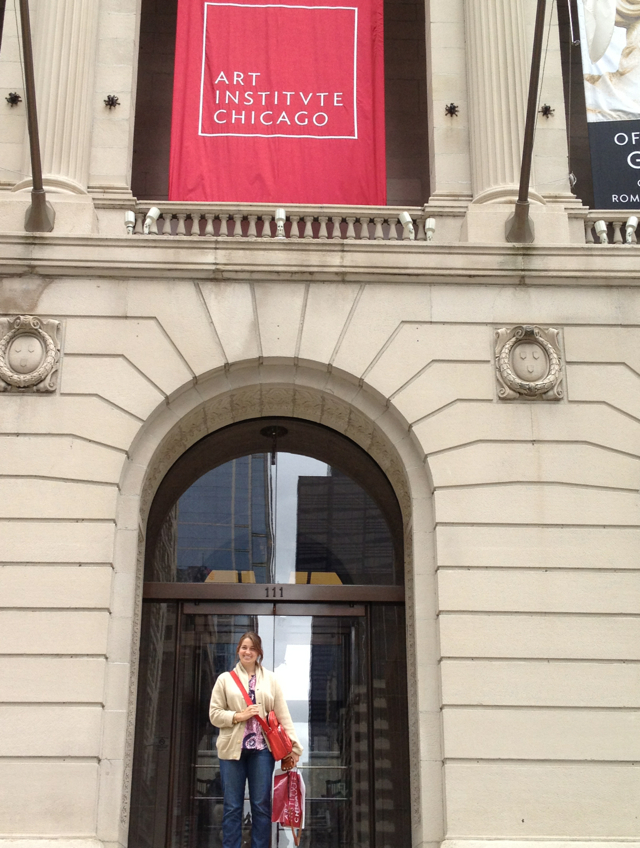 After we ate, we headed out for a walk to the beach and were hit by a frigid wind that pushed us right back up to our room to add a few layers of clothing. It was cold.  It didn't take but a block or two to realize the beach was not going to work. And it was even too cold to walk (it was 50 degrees cooler in one day!) so we hailed a cab and headed to the Art Institute where we spent most of the day. 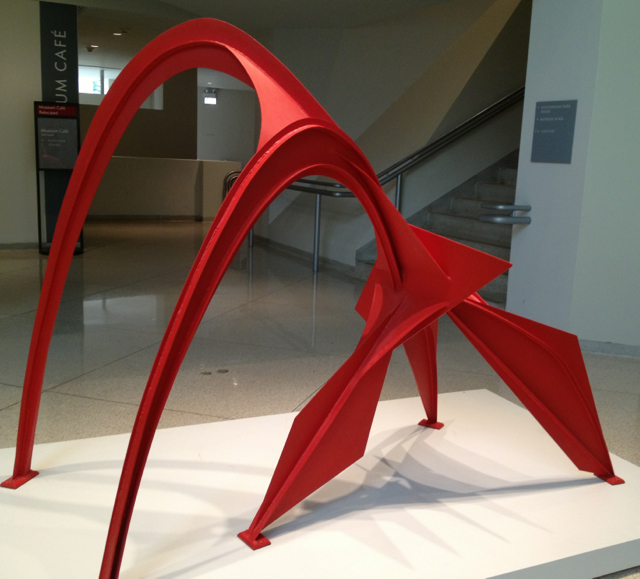 It was a nice day in the museum ... We both saw some of our favorite paintings and artists. They have an extensive collection of Impressionist paintings and a fabulous modern art exhibit. Since this is a design blog ... I thought i would show you some of my favorite modern art pieces. 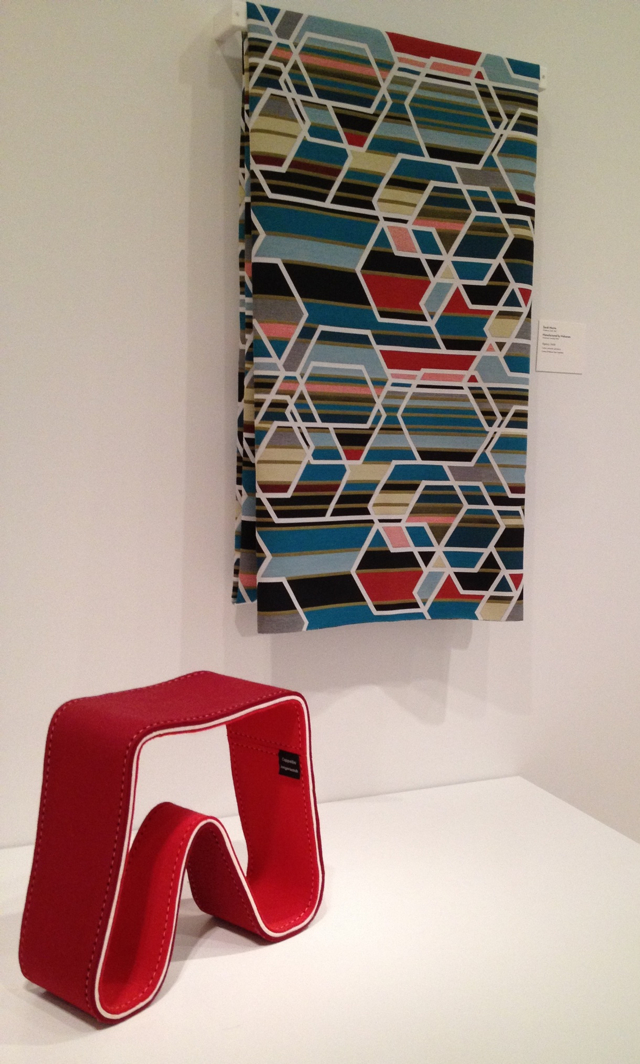 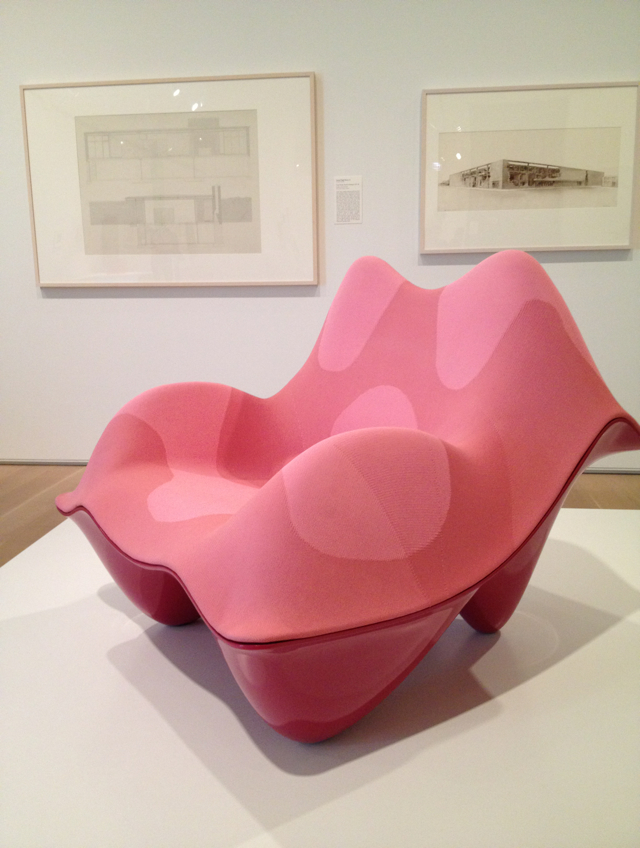 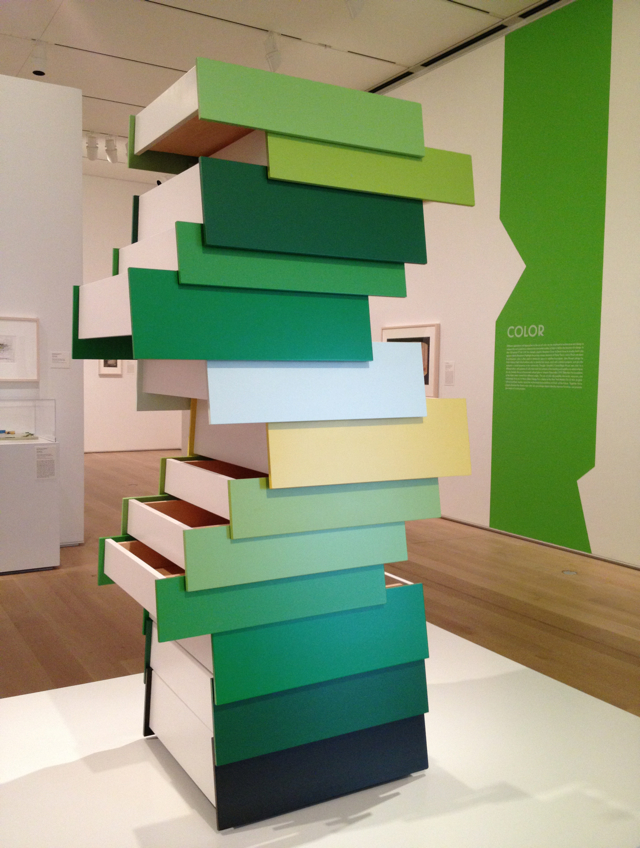 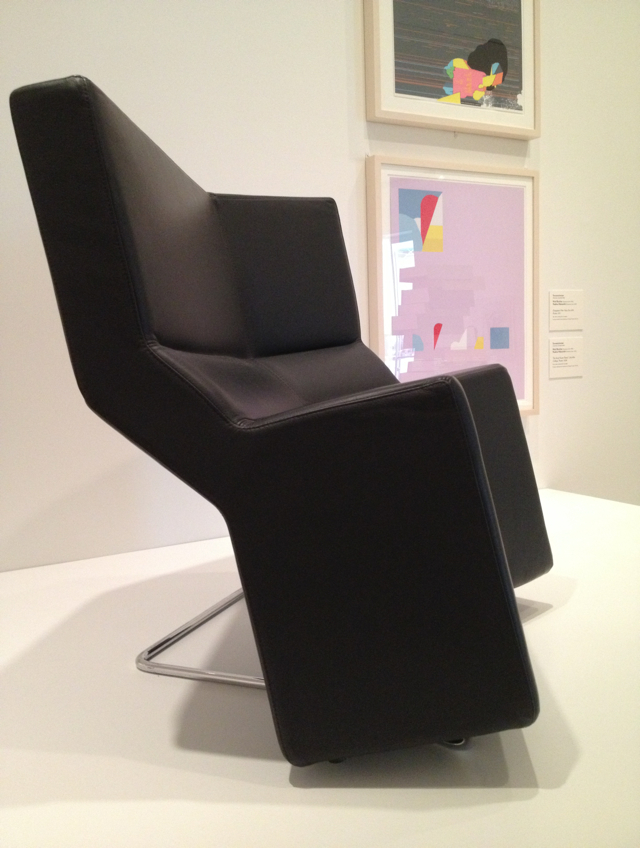 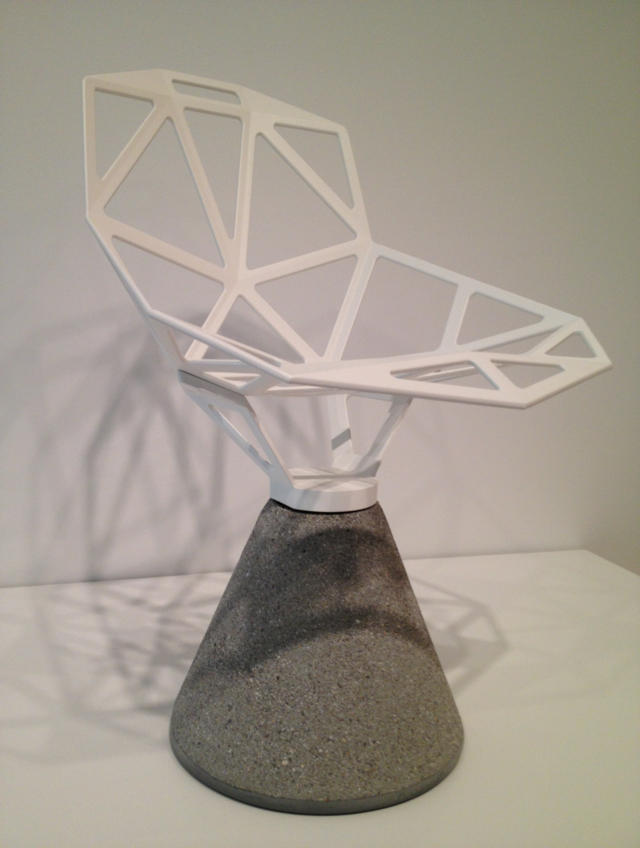 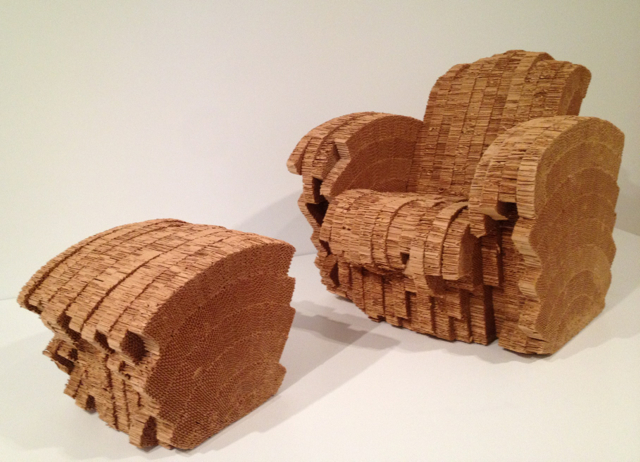 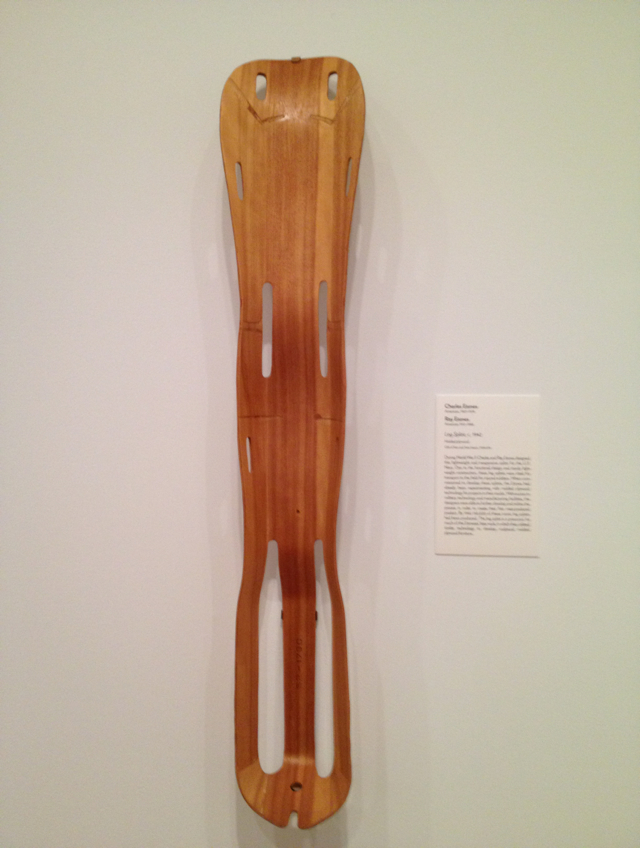 Charles and Ray Eames
This leg splint was designed by Charles and Ray Eames in World War II.  Made out of molded plywood it was lightweight and inexpensive which made it ideal to transport to the field for injured soldiers. The Eames had already been experimenting with molded plywood technology in their studio and by being able to utilize military technology and manufacturing facilities, they were able to further develop and refine the process in order to create their first mass-produced product. By 1945, 150,000 of the iconic leg splints had been produced and was a precursor for much of their later work, in which they utilized similar technology to develop sculptural molded plywood furniture. (Information taken from museum card.) 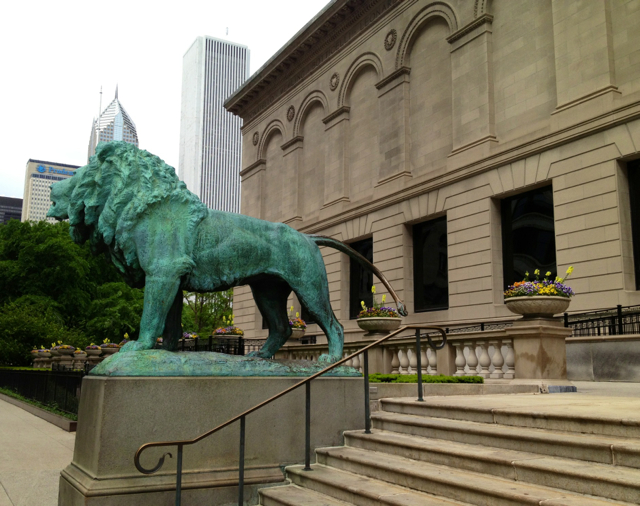 Once we came out of the museum it didn't seem as cold, although I suspect it was because this time we expected it. 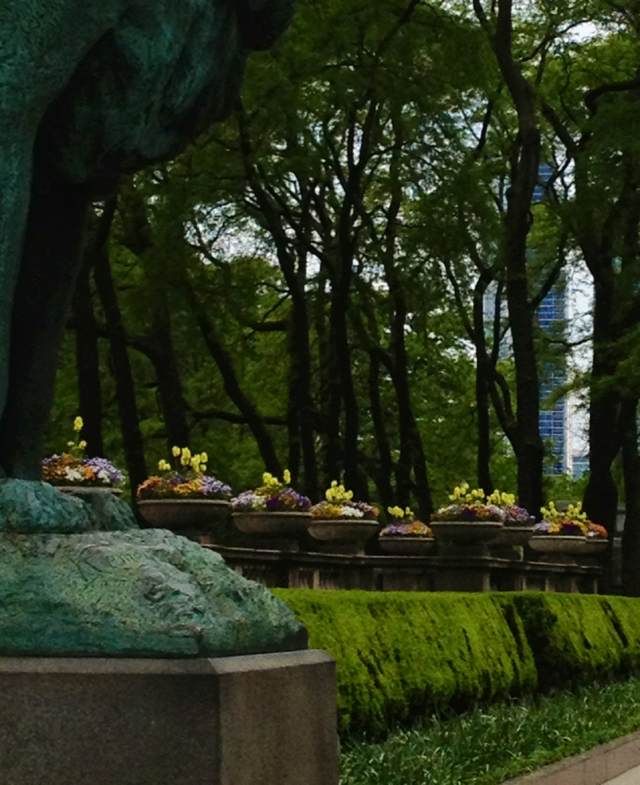 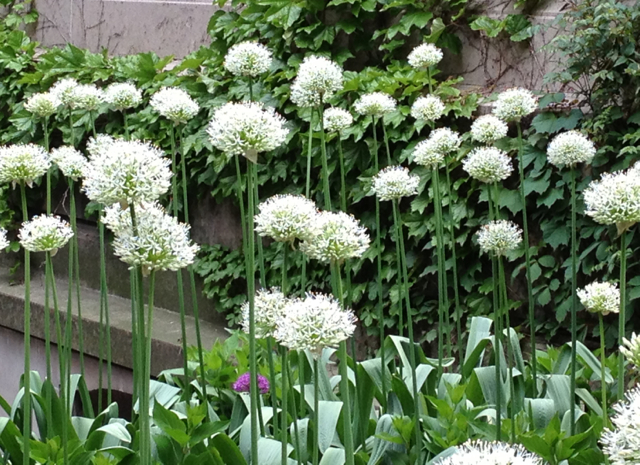 We walked through Millennium Park before crossing the street to hail a cab back to the other side of Michigan Avenue. 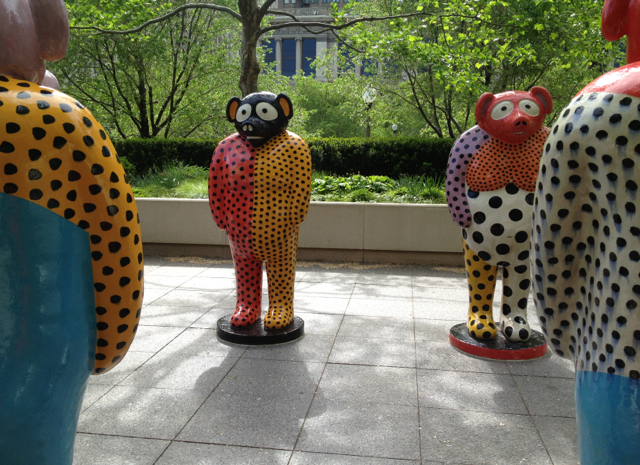 I'm not sure what the story is on these funny sculptures but they are sure cute!  Downtown Chicago is filled with art ... particularly modern sculpture which is an interesting juxtaposition against the historical architecture. 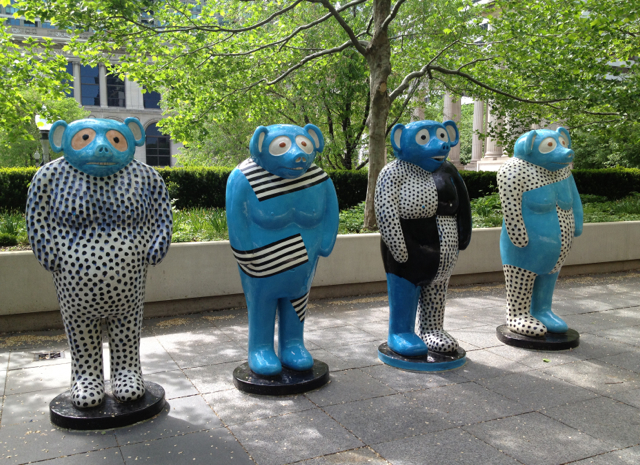 Kaneko 2013
We decided we would "brave it" and check out the beach. I think the cab driver thought we were nuts! The water was no longer the pretty blue-green color it had been all week - instead the muddy looking water was tossing waves around with fury. 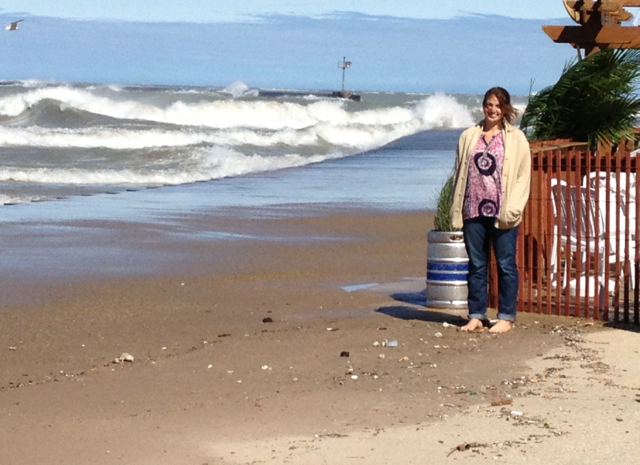 On the way back to change for dinner we stopped in one of downtown Chicago's many beautiful churches. This was a Presbyterian church whose history dates back to Chicago's earliest days and still has a congregation of over 5,000. 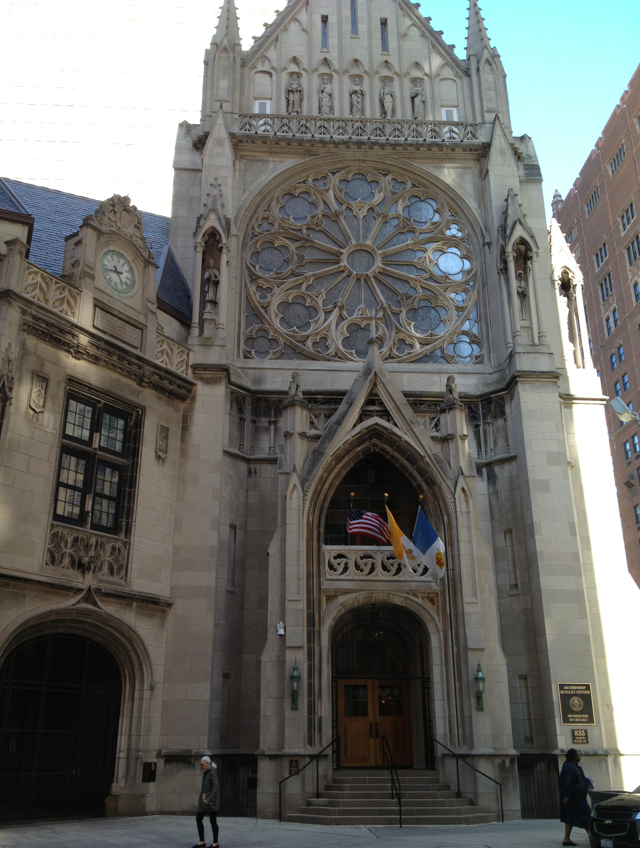 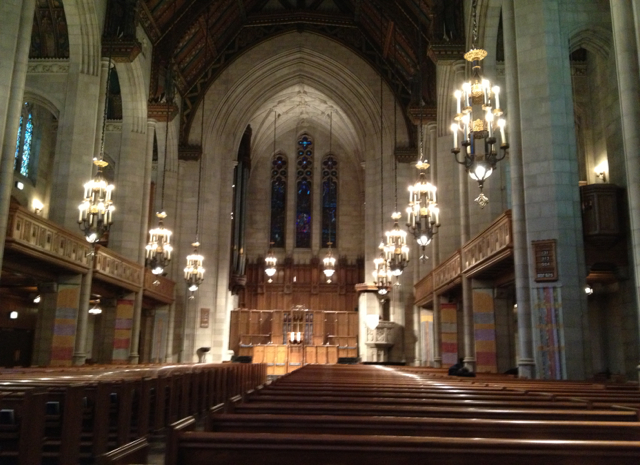 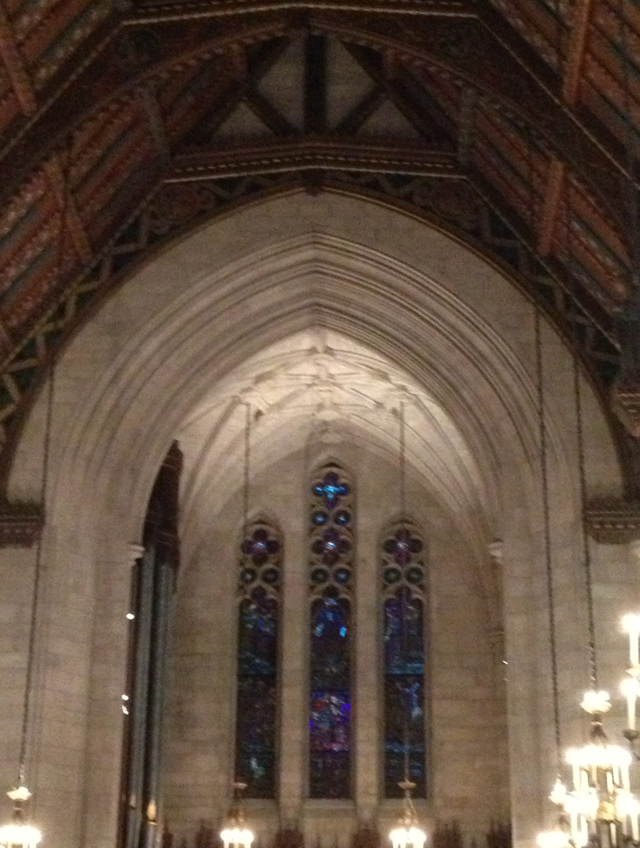 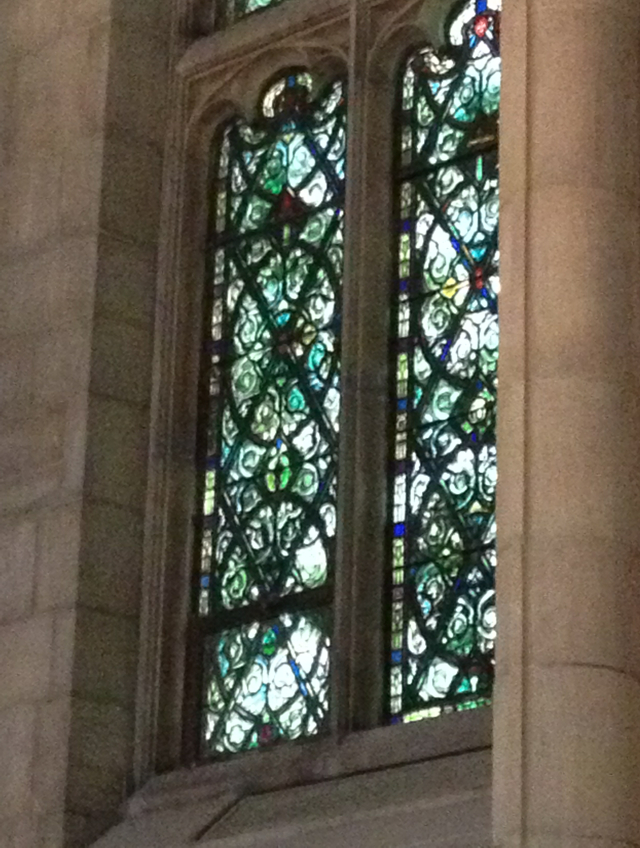 A few blocks from our hotel we passed Downtown Dogs and decided to pick up a hot dog with "the works" as a little pre-dinner snack. We didn't want to leave the city without getting a Chicago dog and this seemed like the next best thing to getting one at a cubs game which we ran out of time to do. I am "gluten-free" and my daughter eats primarily "vegan" so a hot dog is not on our dietary lists in any way ... But we both agreed it was worth the deviation! 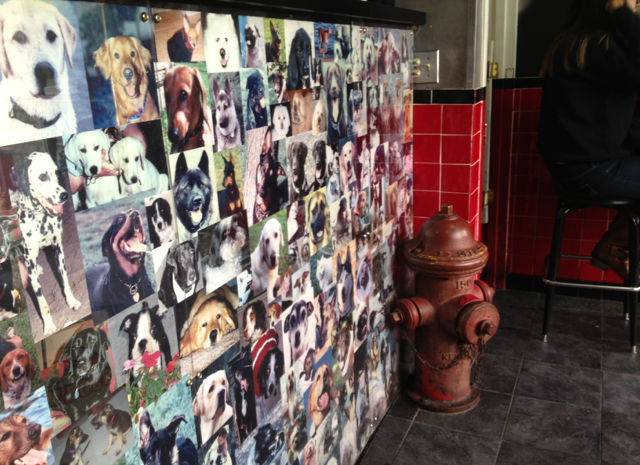 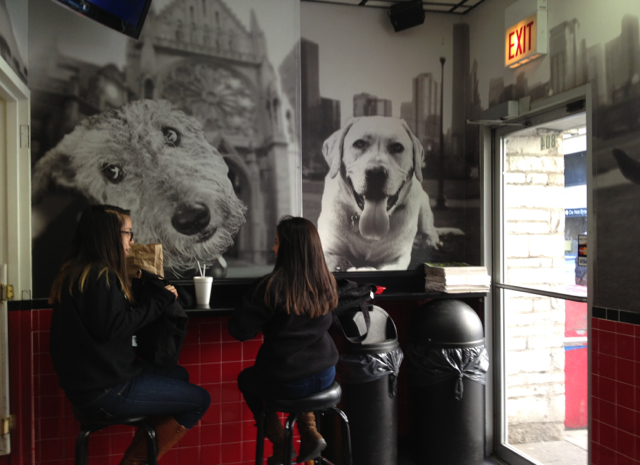 The "restaurant" was filled with all kinds of dogs ... even the TV screens played slideshows of images of dogs. Unfortunately this is where my phone battery died so I can't share our dog with you! 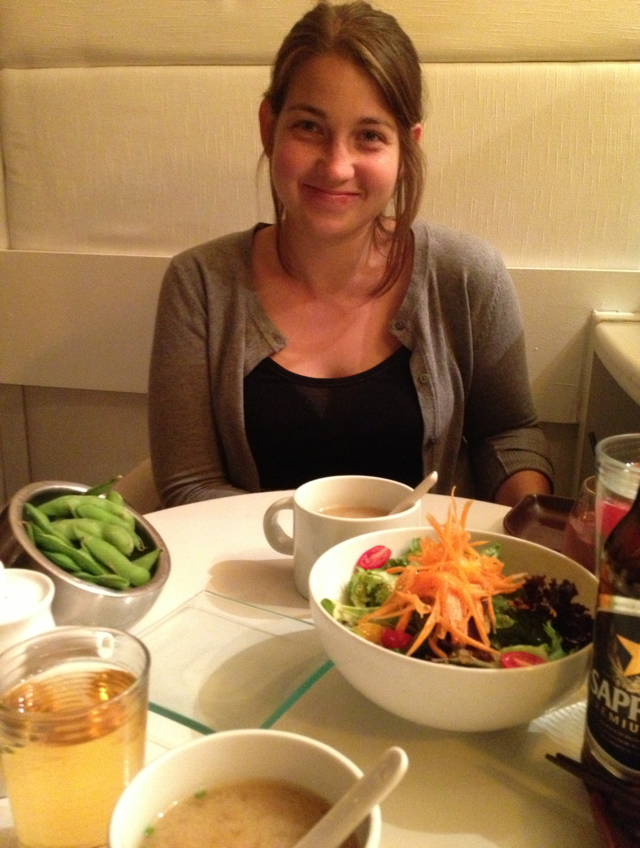 Our choice for dinner was a modern Sushi restaurant a short walk from our hotel. 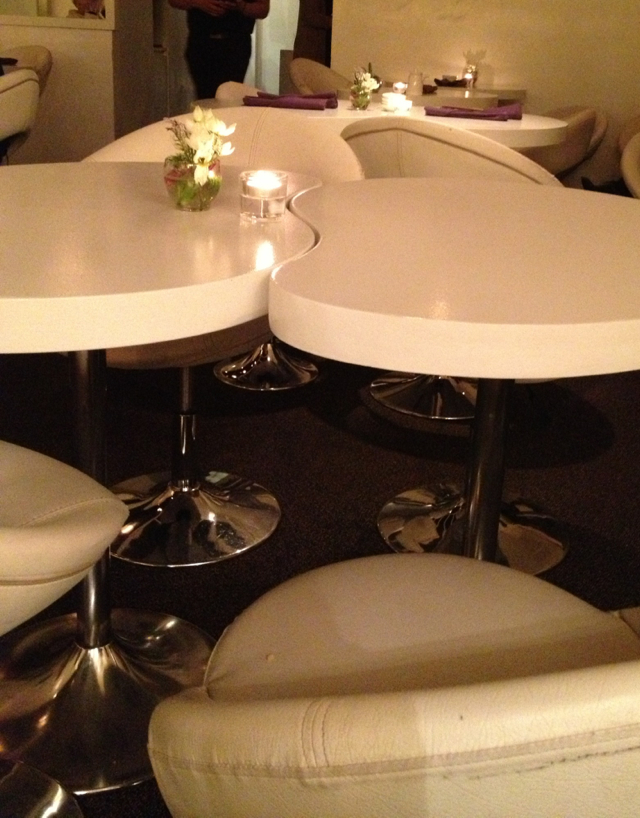 The interior was all white!
Tomorrow morning we are heading out of Chicago and we will be starting our slow drive home! Route 66 here we come! We are so excited!
Posted by Unknown