I have this 'thing' that before I can go on a trip or before a party or a big holiday ... I need to have everything cleaned up and in order. I can hear my sisters laughing at me right now; I have that 'gene' they say, or maybe they say that they 'didn't get it' - this 'have-to-have-things-neat' gene. So before Thanksgiving when I should have probably been preparing for the big day, I decided to clean out the craft drawers. 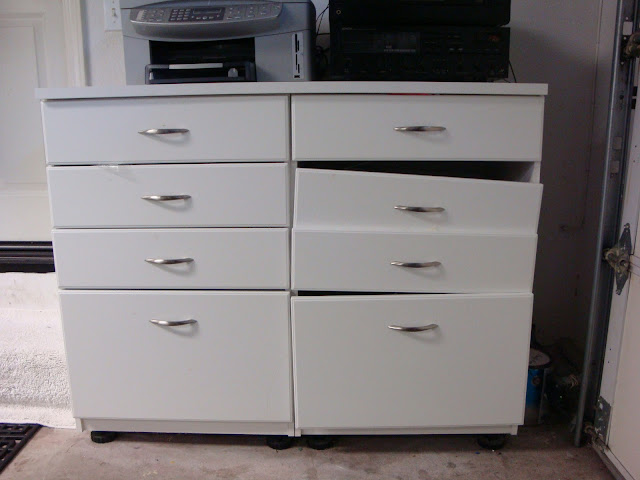 It started because the drawers were a mess and when I went to find the pretty cardstock for our gratitude tree I was appalled at the condition of the drawers. Not only were they a mess inside, but the drawers were so full and heavy that they had come off their gliders and would not even close properly. So I couldn't even 'hide' what was inside and ignore it. 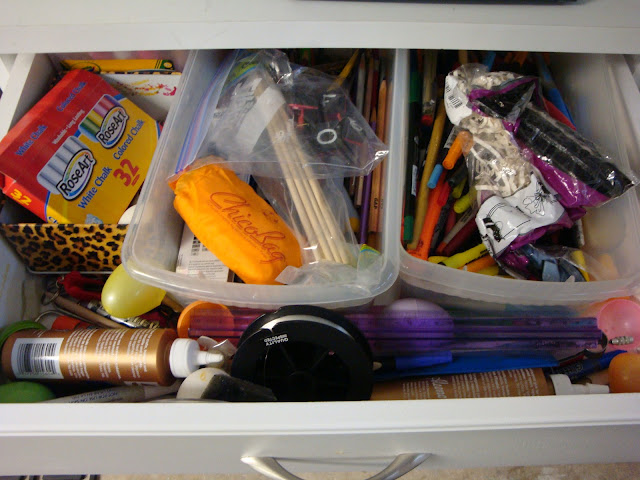 Because my house is small and storage has always been an issue I decided way back when the girls were young that I would have to incorporate my garage as part of the house. I used it as a craft room and a playroom. I had the walls lined with little plastic drawer systems and all the kid's art supplies and the bulk of their toys were out there. It worked out great and freed up the cupboards inside the house for other things. 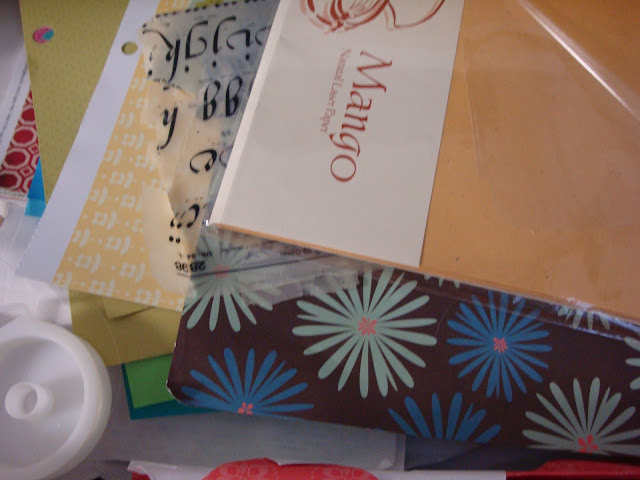 At one point I installed nicer cabinets and drawers and although we don't have the same kinds of art supplies (no more crayons!), I still have all my 'crafting' supplies in the garage - things like craft paint, drawing paper, scrapbooking supplies, markers and colored pencils, and sewing kit. The drawers used to be very organized and neat, but something happens and little gremlins come and mess them all up. 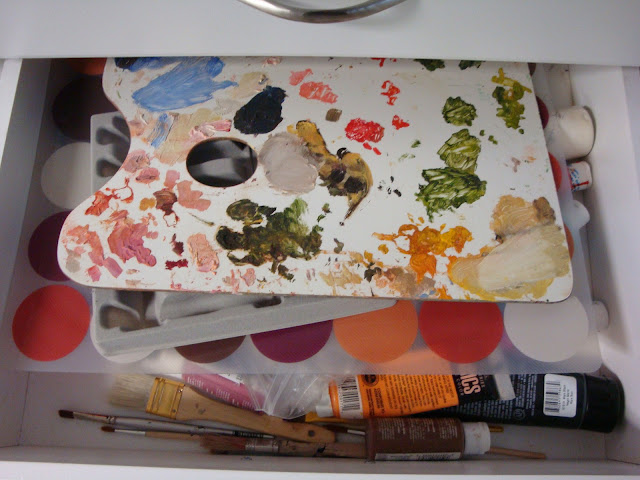 I knew that I had a lot of other things that I should be doing ... like getting the house ready for Thanksgiving ... so I told myself that I would give the drawer clean-out one hour. 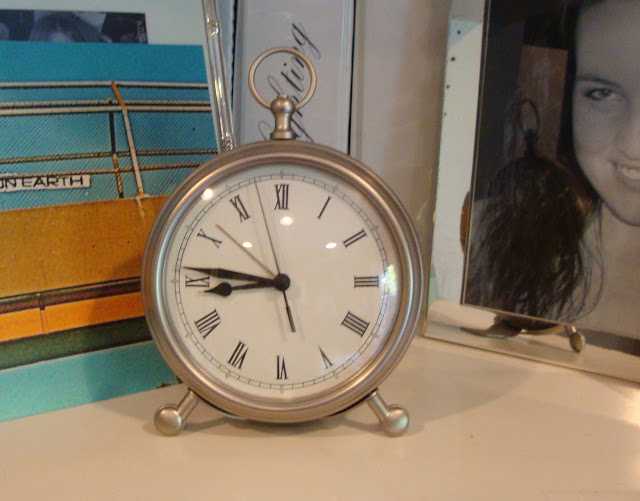 My goal was not to have the drawers 'perfect' the way that I would ideally organize them for a client with the right containers and everything ... but to have cleaned up enough that I could find what I was looking for easily. Here are more of my 'before' photos ... ugh! What a mess! 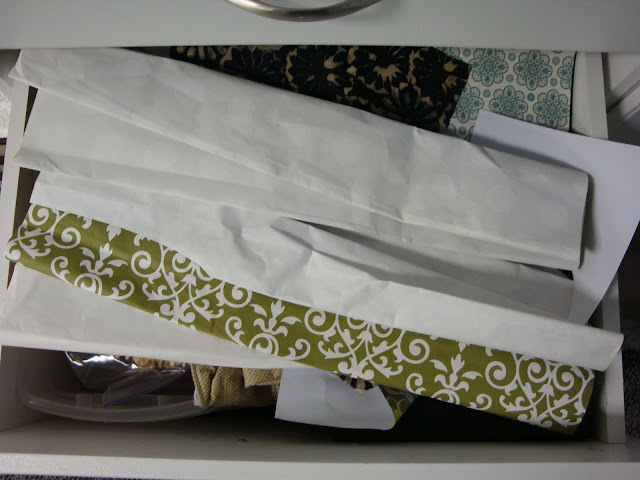 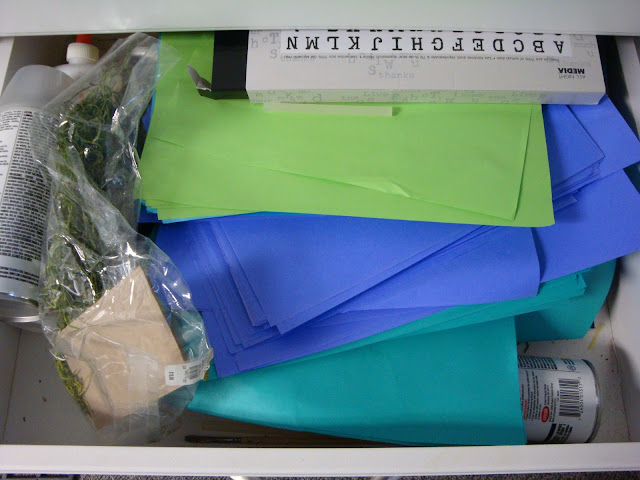 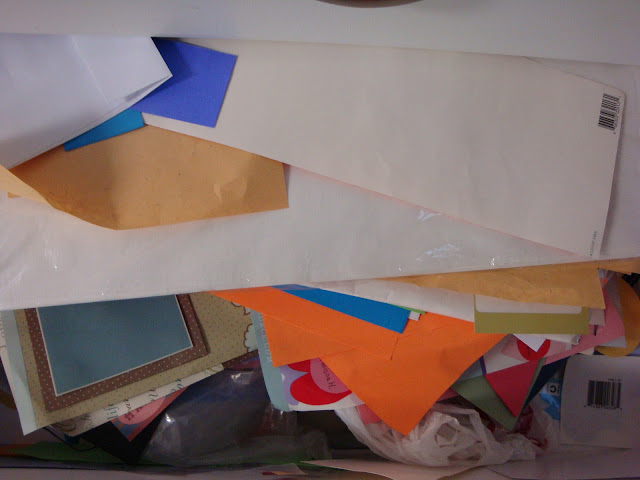 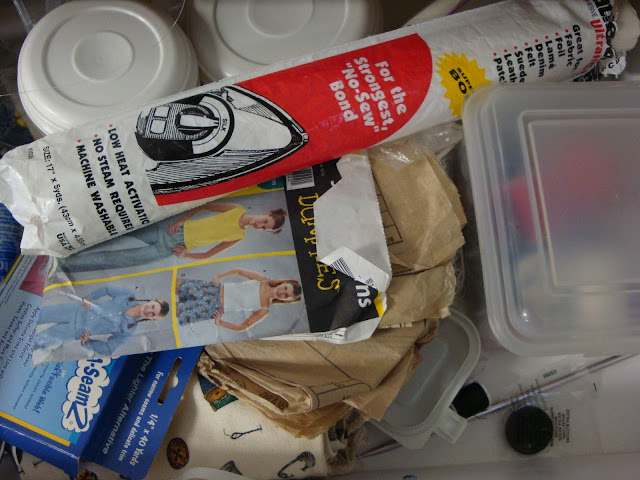 I used the containers that were already in the drawers and basically went through and just straightened up what was in each drawer. There were some drawers that I had to re-adust what was inside them because they were too heavy and it was causing the drawers to not close properly. I wasted a little time looking for boxes to contain things in the drawers. When I am working with a client, I measure the drawer or shelf space and then I shop specifically for what I will use to contain the items in that space. But since this was kind of a 'rush' job I was just making due with what I already had. 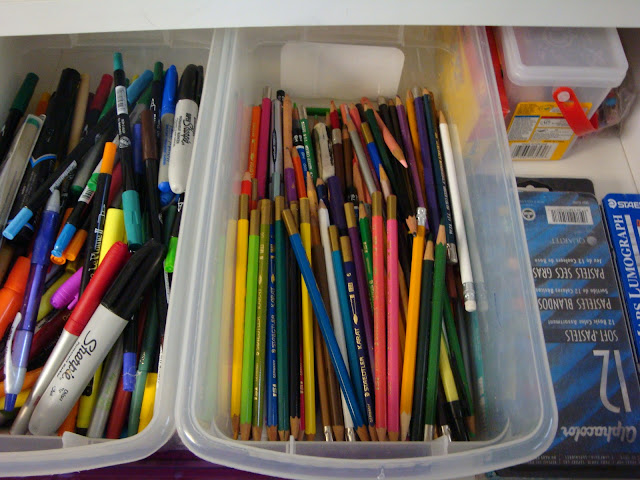 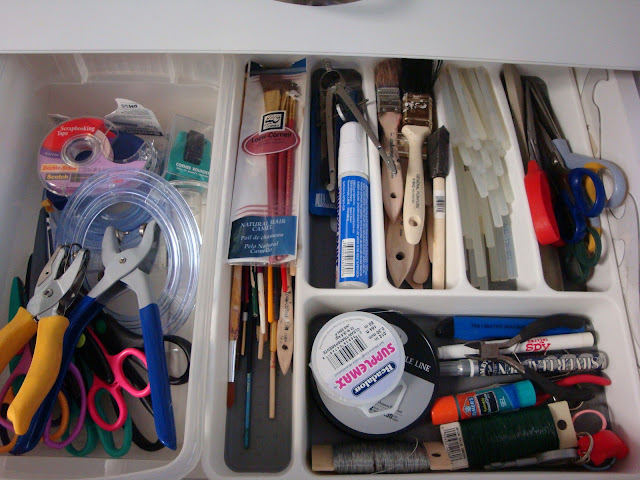 I started with the easy things - the markers and colored pencils and tools. I found an old silverware holder and used that to contain the tools. Then I put all the paint together and the glue together. 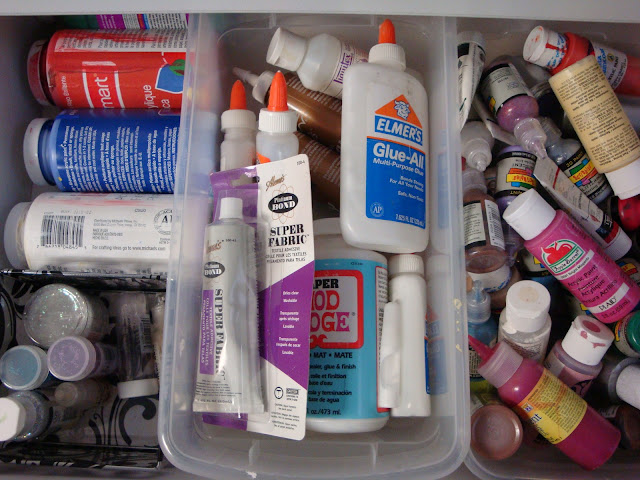 I had to remind myself that this was to be a 'one hour job' and to not get to particular and fussy with the way it was turning out. I would have loved to have the paint lined up neatly and better containers inside the drawers but I had to stay focused on what I was trying to accomplish. 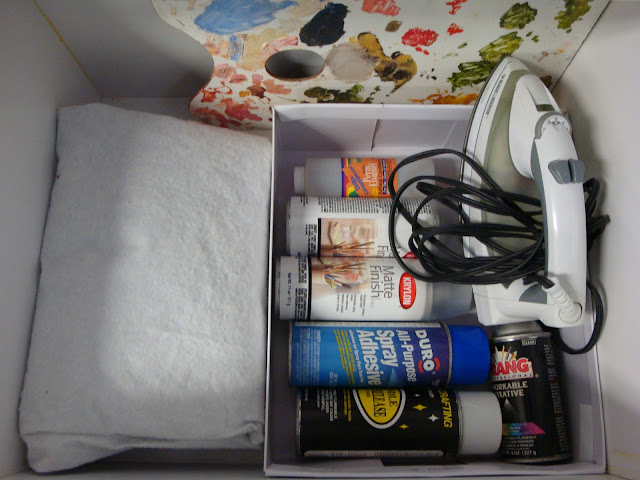 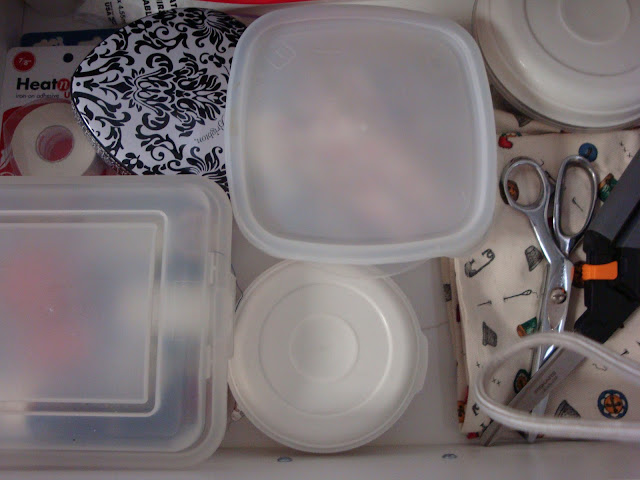 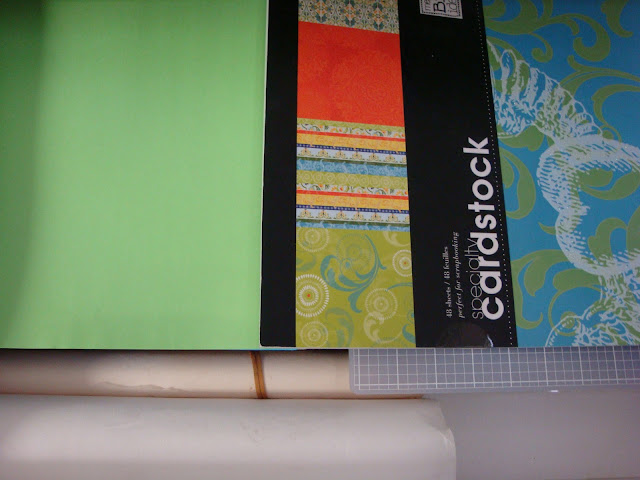 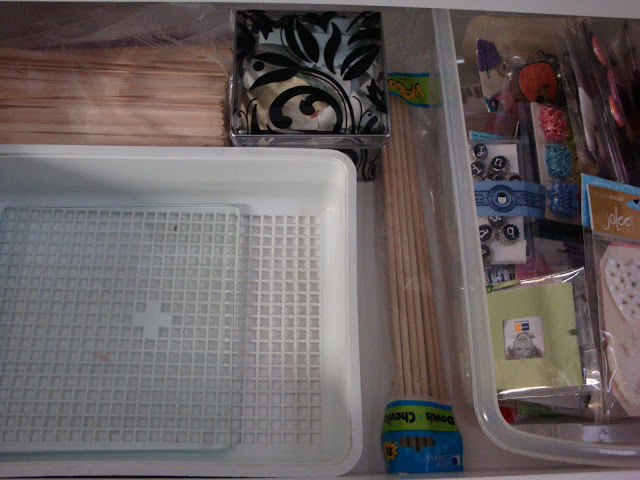 A friend of mine called while I was working on the drawers and so it took longer than I had planned ... interestingly she called about something I had written on my blog that day about getting organized! We chatted while I worked ... I finished up and checked the clock ... hmmm, almost two hours. But still not bad. 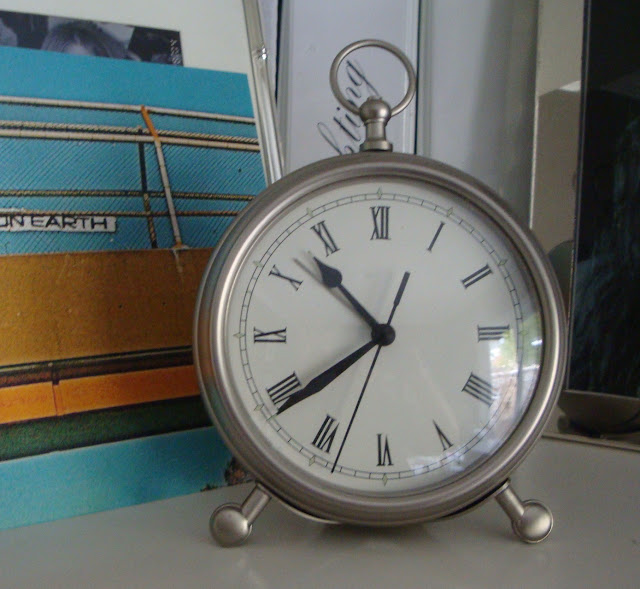 The great part is that I can find what I need (the main thing) and the drawers close better now. There is still an issue with one of the drawer glides and they are still not lined up perfectly ... but that is  something to worry about on another day! 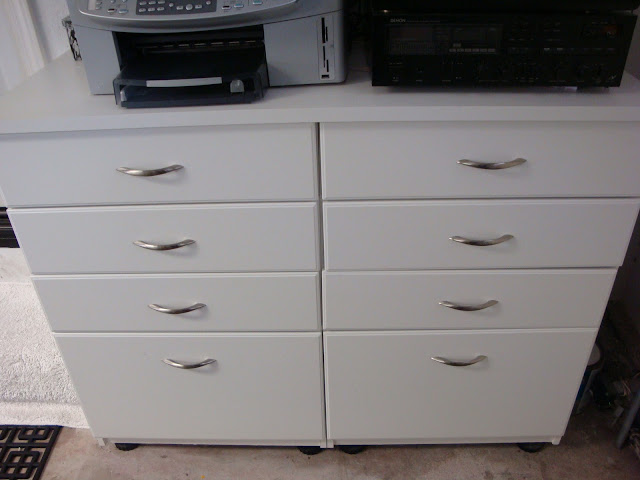 Email ThisBlogThis!Share to TwitterShare to FacebookShare to Pinterest
Labels: organization

Very funny post. I'm laughing....welcome to my life....I would open those drawers, get a sick feeling in my stomach of the work involved, and just close them right back up. :) I think we sisters all have the same gene....the need to have things neat and tidy. I always feel that driving need before I go on vacation, but I can never seem to make it happen, whereas you seem to be able to do that. That is your gift, which makes you really good at what you do. Not laughing...just in awe! xo your sista