What color is your Jesus?

"And there were shepherds living out in the fields nearby, keeping watch over their flocks at night. An angel of the Lord appeared to them, and the glory of the Lord shone around them, and they were terrified. But the angel said to them, "Do not be afraid. I bring you good news of great joy that will be for all the people. Today in the town of David a Savior has been born to you; he is Christ the Lord. This will be a sign to you: You will find a baby wrapped in cloths and lying in a manger." -Luke 2:8-12 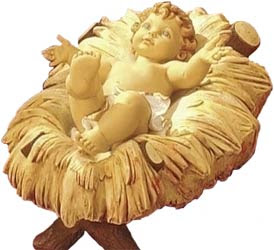 As a little girl I loved playing with our Christmas nativity scene. My sisters and I would play with the cow & the sheep, the wise men & the shepherds, Mary and Joseph, and of course the blond haired, blue eyed Caucasian looking baby Jesus. It was my favorite thing that would come out at Christmas. We grew up being told the Christmas story and yet I don't remember what we played when we moved those figures around and made them talk and play each other. Maybe we just played with them like we did with our Barbies. 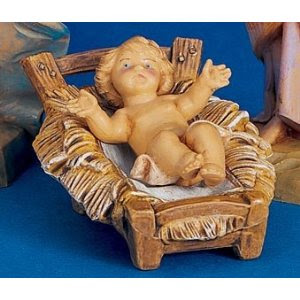 I always intended to get a nice set for my girls but I never found one that was "pass down through the generations" worthy or one that compared to the one I grew up with. We do have a little plastic set that the girls played with just like my sisters and I did, and we were given a gorgeous Boehm porcelain Mary & Joseph and baby Jesus but that was always put way out of reach. 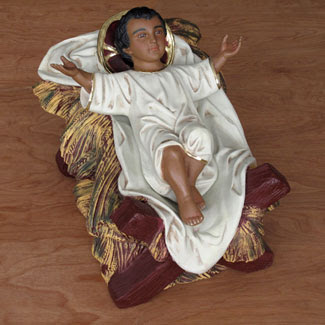 Earlier this week I was out shopping and I saw a set that was really nice and what I loved about it was that it was not like the white-skinned figures that we had. It was more primitive looking and maybe more authentic; at least Joseph looked a little more Jewish than German.  And I started wondering about nativity sets and decided to do a little research. I found out that some of what we put in a typical nativity scene is based on scripture and some is not (the angel and the shepherds are, the Magi were not at his birth, and there is no mention of an ox or a donkey or sheep being present).

I thought it was really interesting to read about the origin of the nativity scene. Wikipedia said that,

"St. Francis of Assisi is credited with creating the first nativity scene in 1223 at Greccio, Italy in an attempt to place the emphasis of Christmas upon the worship of Christ rather than upon secular materialism and gift giving."

I had to wonder about that. I don't think it worked - I can't think of a more materialistic day then Christmas! Click here if you want to read more on the history of nativity scenes.  I also did a little research on nativity scenes around the world.

I really loved looking at all the different nativity figures. I found most of them on this site. I am curious, do you have a favorite nativity set or memory of playing with one?

Wow, all the different colors and styles. I love the one from Mexico the most. Fun and whimsical. Do you remember baby Jesus always missing? lol

Wow I am so glad I came across this post, I thoroughly enjoyed it especially since I just went to Peru. Nativity scenes are my favorite part of Christmas decorating. We have 2 one from my Mother In Law and one was a wedding present, both I love dearly.

I was looking back to try and find your Christmas thank you note/tag post and came across this one! I love seeing all the different nativity sets. Wouldn't it be fun to have a collection?